Eternals: From Angelina Jolie Playing Thanos’ Cousin to the Release Date, Here’s All You Need to Know about the Marvel Film 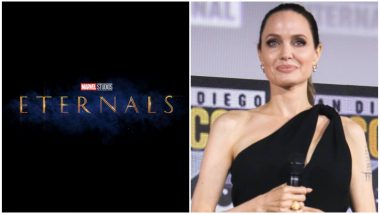 Marvel Studios was sadistically quiet about phase 4 of the Marvel Cinematic Universe, post-Avengers: Endgame and Spider-Man: Far From Home. Today, most of the fan queries were answered as the studio announced the next line-up of projects which includes movies and shows. One of the gripping projects is Eternals, the rumoured cast of which has been fodder for internet for a long time now. Today, the official cast of the film was announced and we are blown away. Go home everyone, Eternals just won the multi-starrer game. The ensemble cast includes Richard Madden, Kumail Nanjiani, Lauren Ridloff, Brian Tyree Henry, Salma Hayek, Lia McHugh, and Don Lee, headlined by Angelina Jolie. And, NO Keanu Reeves, who was long rumoured to be joining the film. Marvel’s Avengers: EndGame Beats Avatar to Be Highest Grossing Movie of All Time, Russo Brothers Thanks ‘The Greatest Fans in the Universe’.

Angelina looked like a Goddess in a black dress as she walked on stage amidst deafening cheers from fans. "I’m so excited to be here! I think what it means to be a part of the MCU, what it means to be an Eternal, what it means to be in this family,” she told the audience. “We’ve all read the script and we know what the task is and so we are going to work very, very hard.” Fans React to Natalie Portman Playing Female Thor in Thor: Love and Thunder and Not Everyone Is on Board with It.

As per the comics, "The Eternals are a race of near-immortal beings genetically engineered by the Celestials". The Celestials had tasked the Eternals to protect the Earth from monstrous villains names as Deviants. After finishing the task, Eternals moved on to other planets. This explains their absence from the Marvel Cinematic Movies so far. Eternals movie will be set in the past, way before any of the MCU storylines even took off. Yes, even before Captain America: The First Avenger. In a way, Eternals is Marvel's first-period film.

Here is a better look at the cast and the characters they'd play reportedly:

I did a baseball. (I promise they are unposed. Pics by @mattcreem.) pic.twitter.com/MMhNhhqqfH

And of course, Angelina Jolie will be playing Thanos' cousin Thena

Angelina Jolie has been casted as Thena in Marvel’s Eternals, Thanos’ cousin who has superhuman strength, cosmic powers, low-level telepathy, and is an immortal scholar. pic.twitter.com/UWgkL6y2XK

Eternal will be directed by Chloe Zhao. “[Eternals] is about this group of incredible immortals, but through their journey, we really get to explore what it means to be human and humanity on our time on this planet,” Zhao said at Comic-Con.

Eternals won't be a culmination event like the Avengers movies are. All the characters will be introduced for the first time Eternals itself. This is the first time, Marvel would be attempting to pull off an ensemble cast without the soft-introductions of the characters and actors first.

(The above story first appeared on LatestLY on Jul 21, 2019 10:44 AM IST. For more news and updates on politics, world, sports, entertainment and lifestyle, log on to our website latestly.com).