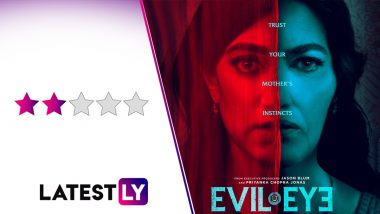 Evil Eye Movie Review: Blumhouse Productions collaborates with Priyanka Chopra Jonas (Executive producer) to make Evil Eye, a horror-thriller with Indian characters and sensibilities. Or rather a mix of NRI characters and Indians who speak like NRI's. And when I say Indian sensibilities, I meant plenty of Indian superstitions, from black eye to punarjanam to star-charts. This is so up the alley of Vikram Bhatt, that I minutely scrutinised the credits to see if he is involved in the film in any way. OTT Releases Of The Week: Priyanka Chopra's Evil Eye on Amazon Prime, Sacha Baron Cohen’s The Trial Of The Chicago 7 on Netflix, Aftab Shivdasani’s Poison 2 on Zee5.

Evil Eye, directed by Elan and Rajeev Dassani, is based on on an audio play by Madhuri Shekar, who had also written the screenplay for the film. Basically, it is a mother daughter story with certain mystery and spooky elements. Usha (Kamasutra's Sarita Choudhury), living in New Delhi, is glad that her 29-year-old daughter Pallavi (GLOW's Sunita Mani), living in New Orleans, has finally found a man. Her boyfriend Sandeep (Unbelievable's Omar Maskati) has every quality of an idea man - he is good-looking, he is ideal and well-behaved.

But, after the initial happiness, Sunita becomes suspicious of Sandeep. Being highly superstitious, she begins to believe that he is the reincarnation of her old lover, who she had killed accidentally 30 years ago. Her apprehensions, of course, are brushed aside by her husband (Silicon Valley's Bernard White) and Pallavi, but Usha is determined to find the truth about Sandeep, and save her daughter, come what may.

Watch the Trailer of Evil Eye:

Perhaps Evil Eye might find some fascination in the West, for their obsession with Indian mysticism. But here in India, we are so very used to superstitions lurking in nearly horror movie there is, that Evil Eye brings nothing new to the table. The only thing that could have worked otherwise for the film is if it was a cleverly written or directed thriller with good horror elements. Just see how the 2016 Iranian film Under the Shadow handles the concept of Djinn. Evil Eye: Priyanka Chopra-Produced Horror Film to Land on Prime on October 13.

Alas, Evil Eye finds very bad luck in those aspects too. Despite a couple of supernatural elements, there is nothing remotely scary or spooky about the film. Evil Eye works more as a mystery thriller, with the suspense revolving around Sandeep's intentions. However, even in that case, Evil Eye is very much predictable and straightforward enough, not helped by the fact that it is similar to films like Mark Wahlberg's Fear, but with a reincarnation twist. Incidentally, returning to the Vikram Bhatt influences, VB had actually made Fear twice in Bollywood!

The writing is pretty ordinary. The relationship between Pallavi and Sandeep is very much rushed, right from their accidental meetup to their moving in together. It also doesn't help that save for a creepy telephonic conversation with Usha, Omar Maskati doesn't bring much to the role.

In fact, the only actor who brings much grace to the proceedings in the veteran Sarita Choudhury, who at least makes the superstitious mumbo-jumbo scenes look bearable. Her eyes manage to convey the fear and thrill, which the film fails to elicit otherwise. Sunita Mani also does good in her role.

In a way, Evil Eye turns into an ode to Indian parents, when it comes to the messaging. Like, having a mother who keep saying on about someone casting an evil eye on you. Or them obsessing over you getting settled early, even if you are away from them in the States. Or they have ill-bearings about the life-partner you choose for yourself, which turn out to be true. I would have forgiven these contrivances, if Evil Eye was at least smart enough to satirise these elements. Sadly, it doesn't!

- Nothing Spooky or Mysterious Here

Evil Eye is one of the most bland offerings from Blumhouse Productions, disappointing more so especially with Priyanka Chopra also involved in the film. It is neither thrilling nor scary enough. Evil Eye is streaming on Amazon Prime Video.

(The above story first appeared on LatestLY on Oct 13, 2020 03:46 PM IST. For more news and updates on politics, world, sports, entertainment and lifestyle, log on to our website latestly.com).