OTT Releases Of The Week: Priyanka Chopra's Evil Eye on Amazon Prime, Sacha Baron Cohen’s The Trial Of The Chicago 7 on Netflix, Aftab Shivdasani’s Poison 2 on Zee5 and More 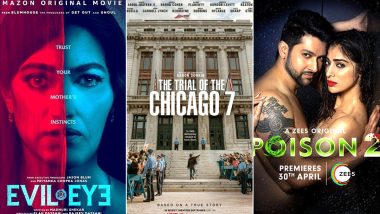 Cinemas are reopening from October 15 with 5-% capacity in India but OTT releases are a huge sigh of relief as people won't risk heading for a movie on the big screen in the times of COVID-19. Taking a look at the OTT releases of the week, there are interesting films lined up for the coming week and the first of them all is Priyanka Chopra produced horror movie Evil Eye on Amazon Prime. The Blumhouse production heads for an October 13 release on Amazon Prime. Next big release that has all our attention is Sacha Baron Cohen’s multi-starrer legal drama The Trial Of The Chicago 7 which is based on true incidents. Daniel Flaherty, Joseph Gordon-Levitt, Michael Keaton, Frank Langella and Eddie Redmayne among others. The Trial Of The Chicago 7 is all set to premiere on Netflix on October 16. Evil Eye Movie Review: Priyanka Chopra Jonas-Produced Spooky Thriller Is Unimaginative and Dull

Bollywood actor Aftab Shivdasani is making his digital debut with thriller series Poison Season 2. The series also stars Raai Laxmi, Pooja Chopra in Rahul Dev in major roles and is all set to premiere on Zee5 on October 16. Putham Pudhu Kaalai releasing on Amazon Prime Video on October 16 is an anthology Tamil movie that includes five Tamil short films. Another interesting release is Disney + Series on the livelihood of Chimpanzees titled Meet The Chimps which is all set to premiere on October 16. Now, let us take at the complete list of movies and series arriving in the coming week. Here are OTT releases of the week (From Oct 11-17). The Trial of The Chicago 7 Movie Review: Sacha Baron Cohen, Mark Rylance Steal The Show in Aaron Sorkin's Powerful Courtroom Drama.

For all the update on movies and series releasing on the OTT platforms, stay tuned to LatestLY.

(The above story first appeared on LatestLY on Oct 12, 2020 07:06 PM IST. For more news and updates on politics, world, sports, entertainment and lifestyle, log on to our website latestly.com).