Ezra Miller’s ‘The Flash’ Withstands the Test of Time Despite Actor’s Controversies, DC Movie To Release in June 2023

Ezra Miller's The Flash is set to release in June 2023 despite the controversies around the main lead. Warner Brothers CEO David Zaslav named off a list of upcoming movies from DC to investors and reporters, Black Adam Shazam! Sequel and The Flash. He also suggested all 3 movies might be tweaked. 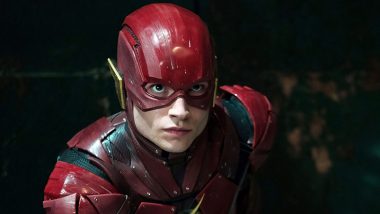 As controversies continue to swirl around actor Ezra Miller over allegations of abuse compounded with other legal troubles, the makers of his upcoming film The Flash confirmed that the film will hit theatres as planned. The makers have set the release date as June 23, 2023, reports NBC News. Warner Brothers CEO David Zaslav, speaking to investors and reporters, rattled off a list of upcoming movies based on DC Comics characters, including Black Adam, the sequel to Shazam! and The Flash, starring Miller as the superhuman speedster Barry Allen. The Flash: Grant Gustin’s CW Superhero Series To Come To End With 13-Episode Season 9.

"We're very excited about them," Zaslav said of the projects. According to NBC News, Zaslav went on to suggest that all three movies might be tweaked before they arrive in multiplexes. "We've seen them," he said. "We think they're terrific and we think we can make them even better."

NBC News also reported that in June, a Massachusetts mother was granted a temporary order of protection on behalf of her 12-year-old child against Miller, 29.

The court order, seen by NBC News, stated that it was "issued without advance notice because the Court determined that there is a substantial likelihood of immediate danger of harassment". Ezra Miller Controversy: Warner Bros Has No Plans To Work With The Flash Actor Again – Reports.

Miller, who identifies as gender nonbinary and uses they/them pronouns, has been asked to appear in court in two states after parents accused them of grooming, abuse and intimidation involving a nonbinary child, 12, and a nonbinary adult, 18. The actor has also been arrested twice this year, both times in Hawaii, on charges of disorderly conduct and second-degree assault.

(The above story first appeared on LatestLY on Aug 05, 2022 07:51 PM IST. For more news and updates on politics, world, sports, entertainment and lifestyle, log on to our website latestly.com).