From Uncut Gems to Taxi Driver, 7 Films That Show Their Main Characters Go on a Downward Spiral!

They make the audience connect with these characters and then have them cringe at every bad decision they make. So let’s take a look at seven films that make their main characters go on a downward spiral. 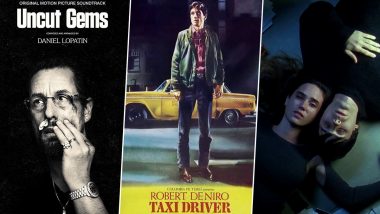 7 Films That Show Their Characters Go on a Downward Spiral! (Photo Credit: Twitter)

When watching a movie, the one thing you want to be on the lookout for is being able to connect with a story. The catalyst of you being able to connect with a story lies in you being able to relate or root for the character in some way. That’s what a good story hinges on. If you can’t relate with your character, then the story ultimately fails. So of course, the character has to be written in a way where the audience actually feel for them and connect to them in a way. From Final Destination to Nightmare on Elm Street 2, 5 Slashers Film That Go 'Final Guy' Route Instead of 'Final Girl'!

In films usually you have characters going through huge arcs that consist of them having to learn from their mistakes. Audiences love that kind of a story, because then a character is easy to root for. But what if the movie shows the character going on a huge downward spiral and makes the audience suffer for them. That’s what movies like Uncut Gems and Taxi Driver do so well. They make the audience connect with these characters and then have them cringe at every bad decision they make. So let’s take a look at seven films that make their main characters go on a downward spiral. From The Batman to The Blair Witch Project, 7 Movies With the Most Creative Viral Marketing!

Taxi Driver is a careful look at how a man loses his own way and delves deeper into madness. Growing angry with the system, Travis Bickle has his mental state deteriorate after working as a cab driver during the night. It’s a slow tale of watching a man lose himself and Martin Scorsese directs Robert De Niro perfectly here.

Requiem for a Dream

Well honestly any Darren Aronofsky film can be added to this list, but let’s take a look at Requiem for a Dream first. Featuring four characters addicted to drugs, the movie focuses on each of them carefully as we see them ruin their lives and just how bad of a state they are in. Requiem for a Dream is a very heavy film that definitely will leave you rooting for these characters.

Dennis Villeneuve’s Incendies is a film that focuses on twins trying to find out more about their mother’s past after she passed away. It’s a film that alternates from past and present and showcases the younger life of their mother too. Incendies surely will leave you in a state of shock by the end seeing what these characters go through. By no means is it a happy ending, and will leave your jaw dropped on the floor.

Joker is a film that’s heavily inspired by Taxi Driver and focuses on telling the origins of Arthur Fleck and how he came about to be DC’s clown prince of crime. Throughout the movie it features Arthur being put through the grinder and finally breaking. Joaquin Phoenix gives a wonderful performance showcasing  a man losing his sanity.

Another film by Aronofsky, Mother! Stars Jennifer Lawrence as mother. The film focuses on her as her perfect life with her husband is disturbed after a mysterious couple arrives. The film is a subtle metaphor about how us as humans are abusing Earth, and that in the film is portrayed with Jennifer Lawrence’s character being constantly harassed.

This South Korean action-drama is as shocking as they come by the end of it. Showing a man kidnapped and escaping into humanity after a long grueling amount of years, Oldboy sees him enact vengeance on his captors while falling in love with a girl. Like Incendies on this list, the movie sees the character discover a shocking revelation by the end that will leave you horrified.

The Safdie brothers did a great job by making an amazing thriller with Good Time, but they upped the ante with Uncut Gems. Featuring a jeweler played by Adam Sandler, we follow him around throughout the film seeing him make the worst decisions of his life. Watching Uncut Gems is like giving yourself anxiety, and that’s what is so amazing about this film.

(The above story first appeared on LatestLY on Feb 01, 2022 10:00 PM IST. For more news and updates on politics, world, sports, entertainment and lifestyle, log on to our website latestly.com).