Halle Berry Birthday: 5 of the Coolest Performances in Her Filmography

Despite limited screen presence and badly written character, Hally Berry makes a mark as Storm. And, we hope someday, she gets a juicier part as the superheroine, now that the franchise has found a new home at Disney. 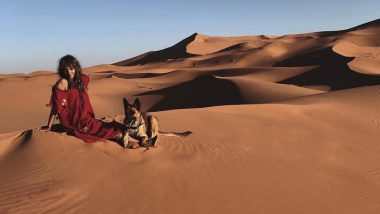 Halle Berry is celebrating her 54th birthday. The actress is the queen of underrated films. Catwoman is not a great comic book film, but is it universally the worst film ever? Um...no! Without the external noise marring my judgement, I was entertained by the film when I watched it as a kid. Berry is a fantastic actress, with her talent underutilised by the industry. The actress has some critically acclaimed roles in her kitty and an Oscar as well, and yet we have not even seen the half of her talent. Halle Berry Birthday Special: A Fashionista Who is Always a Storm On the Red Carpet (View Pics).

Today, on her birthday, we are going to list down some of our favourite roles played by the actress. Some might be controversial, so hang on tight.

While this is her best role, this also is her worst. She played the superhero Storm in the X-Men series. But, God, her savage character barely gets to do anything in the series. She was a character with potential for a spin-off, but, sadly, she was reduced to a line as bad as, "You know what happens to a toad when its struck by lightning?"

Despite limited screen presence and badly written character, Hally Berry makes a mark as Storm. And, we hope someday, she gets a juicier part as the superheroine, now that the franchise has found a new home at Disney.

Berry starred in this horror film, which did not impress the critics at all. But, it is an underrated scare-fest. What makes the movie scary not just the supernatural elements. The horrors of a being trapped in a mental institution, sexual abuse, trauma, torture, there are so many elements that make the movie spine chilling. Halle is awesome in it.

Another underrated film on Halle's list. She played a 911 call agent. Most of the movie unfolds over a long, distressing, phone conversation and yet it is an edge of the seat thriller.

The actress rose to international fame when she was cast as the Bond Girl in this film exploring the adventures of James Bond.

The actress won an Academy Award for her role in this drama. She is the only woman of colour to win the Oscar for Best Actress. While we are proud of Berry, we are not exactly thrilled about this sad fact.

(The above story first appeared on LatestLY on Aug 14, 2020 04:21 PM IST. For more news and updates on politics, world, sports, entertainment and lifestyle, log on to our website latestly.com).