Lady Gaga, Adam Driver starrer is based on Sara Gay Forden’s book titled “The House of Gucci: A Sensational Story of Murder, Madness, Glamour and Greed. 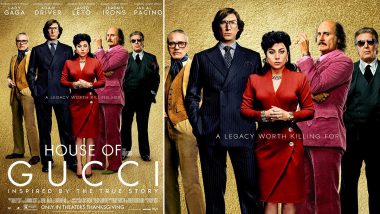 Ridley Scott’s House of Gucci revolves around the iconic Italian fashion empire Gucci. It is based on Sara Gay Forden’s book titled “The House of Gucci: A Sensational Story of Murder, Madness, Glamour and Greed”. Lady Gaga plays the character Patrizia Reggiani, wife of Maurizio Gucci that has been portrayed by Adam Driver. The film showcases how the two include in fight for power, money to be the true force of the Italian luxury label. House of Gucci: Ridley Scott Hits Back at the Criticism From the Gucci Estate About His Upcoming Biographical Crime Film.

Expectations were sky-high for House of Gucci after knowing its stellar star cast. The film also featured Jared Leto, Jeremy Irons, Al Pacino and Salma Hayek. However, this film about the Gucci dynasty has failed to impress critics. Neither the performances nor the narrative could manage to leave an impressive remark. Take a look at what critics had to say about the film.

Los Angeles Times – “House of Gucci” will surely do its part to burnish the brand, even as it gleefully airs two decades’ worth of dirty (but still utterly fabulous) laundry. But Scott, now 83 and an ever more clear-eyed, dispassionate observer of how power and industry operate behind closed doors, doesn’t go out of his way to fetishize the inventory.

IGN – With that casting of Gaga as Reggiani, there shouldn’t even be a question that the movie’s point of view belongs to her, yet it surprisingly does not. While it opens and closes with Maurizio on the day of his murder, the narrative is so scattershot in trying to service its large celebrity cast that there’s no clairty about exactly whose version of the events this is supposed to be.

The Hollywood Reporter – Ridley Scott’s film is a trashtacular watch that I wouldn’t have missed for the world. But it fails to settle on a consistent tone — overlong and undisciplined as it careens between high drama and opera buffa.

The National News – If House of Gucci disappoints, it’s in the final act. The film runs to 158 minutes – its overlong running time hardly a surprise, given that everything else herein is overblown – and it can’t quite sustain the momentum all the way to the end.

Variety – Scott, working from a shrewdly layered script by Becky Johnston and Roberto Bentivegna, directs with a tone of deadpan puckish gravitas. Spanking the action along with Italian pop songs and snippets of opera, he stages each scene in an impeccable, neoclassical head-on way that has no ironic distance yet creates space for the suck-in-your-breath comedy of scandalous behavior.

The New Yorker – “House of Gucci” is Gaga’s movie, and she tears into it with an exuberant yet precise ferocity. She is the main reason why the movie at times transcends the limits of its scripted action.

(The above story first appeared on LatestLY on Nov 23, 2021 04:26 PM IST. For more news and updates on politics, world, sports, entertainment and lifestyle, log on to our website latestly.com).