Idris Elba Birthday Special: From the Suicide Squad to Thor Ragnarok, Here Are Five of His Best Movies Ranked According to IMDb

Talking about highly talented English actors, Idris Elba is a name that will surely pop up. Elba is one of the most hardworking stars in Hollywood right now and for good reason. 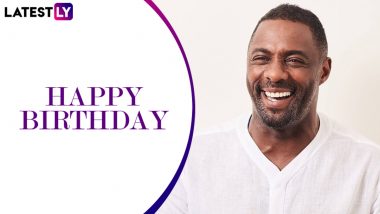 Talking about highly talented English actors, Idris Elba is a name that will surely pop up. Elba is one of the most hardworking stars in Hollywood right now and for good reason. The man oozes classiness and charisma that makes him so much more distinguished than other actors in Hollywood. Elba has consistently showcased his acting talents and just how good he is at what he does. Elba is able to bring such energy to characters that would seem really boring on paper, but it’s his performance that makes them so much more convincing. Idris Elba To Voice Knuckles in the Upcoming Film ‘Sonic the Hedgehog 2’.

Idris Elba has had many great films and his filmography is there to prove that for us. So to celebrate Idris Elba’s 50th birthday, we are taking a look at five of his best films ranked according to IMDb. PS: Not considering movies where the actor had a cameo. Like in Avengers: Infinity War.

Directed by James Gunn, The Suicide Squad sees Task Force-X travel to Corto Maltese to take down something known as Project Starfish. Elba plays the role of Bloodsport, a supervillain great with weapons and putting Superman in the ICU. Bloodsport was Elba’s best role in years and for good reason. He carries the film on his back and gives an amazing performance showcasing leadership skills. The Suicide Squad Movie Review: James Gunn’s DC Epic Is a Violent Delight.

Beasts of No Nation is a harrowing and exhausting story about a child soldier that bolsters some amazing performances. One of those performances was of Idris Elba, who plays the role of a commandant. Elba plays this character with no humanity in him and it just makes for a villain that you immediately want to see be taken out.

Sometimes in April is a tale about the Rwandan Genocide and that explores this event. It’s a tale about a violent uprising that portrays human struggles. Idris portrays the role of Augustin and is one of his best roles that showcased his acting chops.

Thor: Ragnarok was a refreshing entry in the MCU and gave us a funny romp about this Norse tale. Amidst all the chaos and craziness of Ragnarok, Elba’s role as Heimdall brings a bit of grounded feeling to it.

Zootopia is a brilliant animated film that has some diverse and great voice work in it. Elba plays the role of Chief Bongo, who is a stern cop but has his heart in the right place. His character is one amazing character in the sea of many. If you’re looking for a fun and lighthearted Disney animated film, then Zootopia is for you.

We hope that Idris Elba continues to deliver us great movies like these because he clearly is a man of many talents. With this we finish off the list and wish Idris Elba a very happy birthday.

(The above story first appeared on LatestLY on Sep 06, 2021 05:43 PM IST. For more news and updates on politics, world, sports, entertainment and lifestyle, log on to our website latestly.com).