Jay Z Compares His Lady Love Beyonce to the King of Pop Michael Jackson, Here’s Why

Jay Z compared his singer-wife Beyonce to the late 'King of Pop' Michael Jackson in a recent chat with Alicia Keys on Twitter Spaces, saying Beyonce has surpassed Jackson with her iconic 2018 Coachella performances. 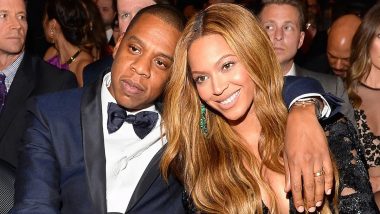 Music producer Jay Z compared his singer-wife Beyonce to the late 'King of Pop' Michael Jackson in a recent chat with Alicia Keys on Twitter Spaces, saying Beyonce has surpassed Jackson with her iconic 2018 Coachella performances. He said: "Bey's gonna be mad at (me) for saying this but Michael Jackson never had a Coachella. The kids are the same. Find me a concert that's as culturally relevant and thrilling as Coachella. Beyonce is gonna be one of the best singers we ever heard because she is such a student." Jay Z Quits Instagram a Day After Making His Official Debut on the Photo-Sharing Application.

Back in 2015, Charlamagne Tha God also compared Beyonce and Jackson, reports femalefirst.co.uk. Charlamagne Tha God had said: "I think she's the greatest entertainer that our generation has seen. I mean, the previous generation had Michael Jackson. But for our generation I think it's Beyonce. "And I even put you can't compare anybody to anybody. Michael Jackson is a god. He's legendary. He's on a totally different level. Beyoncé Makes Her TikTok Debut, Attracts Millions of Followers Sans Any Content.

"But Beyonce, if she's not already, she absolutely will be on that same level. She will be looked upon in the same regards, if not more, as Michael Jackson was. That's just the truth to the matter. People hate when I say that, but you'll see in the future. It's gonna happen." Beyonce previously pair tribute to Michael, who died from acute Propofol intoxication in 2009, saying: "(Michael) taught me that sometimes you have to forget technique, forget what you have on. If you feel silly, you have to go from the gut just let it go."

(The above story first appeared on LatestLY on Dec 24, 2021 11:01 AM IST. For more news and updates on politics, world, sports, entertainment and lifestyle, log on to our website latestly.com).