The black suit has been one of the most discussed points on the internet and now finally viewers have got a glimpse of it. The clip which has been released also features Jeremy Irons as Alfred. 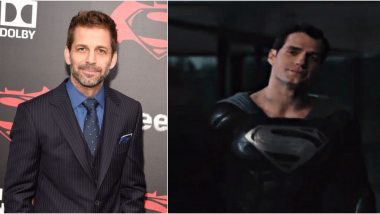 Ever since the news of Justice League Snyder Cut getting an HBO Max release was announced, fans have been waiting to get a glimpse of it. A clip from the upcoming Snyder Cut of Justice League is out as it was unveiled at the Zack Snyder panel at Justice Con. The new clip which was featured on Justice con is now creating a stir because it features Henry Cavill's Superman in a black suit. Yes! The black suit has been one of the most discussed points on the internet and now finally viewers have got a glimpse of it. The clip which has been released also features Jeremy Irons as Alfred. Here's What Zack Snyder Has to Say About Robert Pattinson's The Batman!

For the uninitiated, Warner Bros recently announced that the original version of the movie, popularly referred to as Snyder-cut by the DC Comics fans will debut on HBO Max in 2021. It has been confirmed by Snyder that the film will consist of footage shot by only him and nothing that his successor Joss Whedon has worked on. During the panel, Sndyer was quoted saying, "There will be no chance on earth that I will use a shot prior or after I left the movie. I would destroy the movie, I would set it on fire before I would use a single frame that I did not photograph. That is a f***ing hard fact." Avengers: Endgame Director Russo Brothers React to 'Snyder Cut' and Reveal if Marvel Ever Interfered with Their Vision.

Check Out the Clip Here:

Zack Snyder has previewed an official look at Henry Cavill's Superman wearing the iconic Black Suit during his panel at #JusticeCon! pic.twitter.com/QaTA9CK4RR

Fans of DC comics, as well as the film universe, know that Cavill had teased a black suit on his Instagram account before the release of Justice League in 2017 although the final product of the film did not have anything to do with the suit. Snyder, who previously helmed Man of Steel and Batman v Superman: Dawn of Justice, had left Justice League during the post-production due to a family tragedy. The Snyder Cut has been immensely popular among DC comics fans and they are certainly going to be thrilled with this new clip.

(The above story first appeared on LatestLY on Jul 26, 2020 04:05 PM IST. For more news and updates on politics, world, sports, entertainment and lifestyle, log on to our website latestly.com).