In the teaser, we can see Superman (Henry Cavill) his battle in front of the monument. 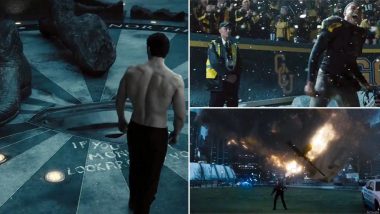 The DC Fandome craze has been only escalating after the main trailer of its event arrived on the internet.  The grandeur and the magnanimity of the online event promises huge surprises regarding the movies on the popular characters of DC world. One of them is the Jack Snyder's Justice League. The Snyder's Cut version has been the demand of the fans for very long. He finally gave a huge glimpse of the same with a teaser video right before the event. Zack Snyder Is Working on His Cut of Justice League for Free.

In the teaser, we can see Superman (Henry Cavill) his battle in front of the monument. We can also see burning tank hurtling towards a police officer and that Cyborg is going to stop it and save the man. The teaser also hints at the Justice League members arriving at the scene to confront a resurrected Kal-El. Check out the video below.

The fans lost their cool looking at the video and sent the internet melting down with fiery excitement. Snyder Cut of the movie that was taken away from the filmmaker in 2017. Speaking of the mega event, it is slated to be on Saturday, August 22. Stay Tuned for the updates.

(The above story first appeared on LatestLY on Aug 20, 2020 09:06 PM IST. For more news and updates on politics, world, sports, entertainment and lifestyle, log on to our website latestly.com).