Justin Bieber was still finishing his workout when Taylor Swift's team requested everyone to vacate the room for her personal appointment. 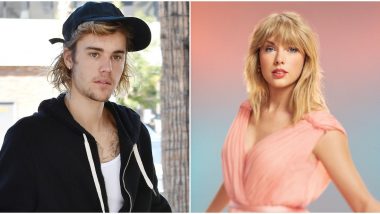 Taylor Swift won't just workout amid the prying eyes of random gym users. She needs her space, she needs her time and most importantly, she wants her trainer to focus on her and her only. Which is precisely why she booked an appointment with her personal trainer that demands the gym authorities to vacate the room for the singer. But what happened when Justin Bieber, another big client of theirs was already working out and still had some time before finishing his session? Well, the goof-up on the gym management's part could have started another major brawl between the singers but thankfully, it was averted. Taylor Swift Confirms Justin Bieber Cheated on Selena Gomez After His Instagram Diss.

According to a report in TMZ, Taylor was already at the Dogpound Gym in West Hollywood to keep her appointment when Justin Bieber was still finishing his workout session. When the singer's team requested to vacant the premise, Justin and his team decided to stay back until the Baby singer was done with his session for the day. Though Bieber was done with his workout, he was simply goofing around and dancing. The singer had no idea that it was Taylor's appointment and she had requested to clear the gym. However, he soon exited the room and the others waiting with him had to leave as well. Justin Bieber Slams Taylor Swift for 'Crossing a Line' with Scooter Braun.

It's unclear as to why the gym didn't inform Bieber about Taylor's appointment beforehand. Their personal equation with each other is strained at the moment courtesy his closeness to Scooter Braun. Though he had partly apologised to her for the whole drama, their equation continues to remain twisted. Maybe a workout session together will help them bury the hatchet.

(The above story first appeared on LatestLY on Jan 19, 2020 07:16 PM IST. For more news and updates on politics, world, sports, entertainment and lifestyle, log on to our website latestly.com).