Justin Bieber Birthday: Baby, I Don’t Care, Anyone – 6 Hit Songs Of The Canadian Singer That You Would Love To Listen On Loop!

Justin Bieber, who celebrates his 27th birthday on March 1, is one of the world's best-selling music artists. He has earned some of the most prestigious awards in his musical career. 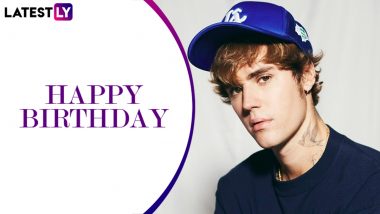 Justin Bieber was introduced to the world in his early teenage. He was discovered on YouTube at the age of 13 by talent manager Scooter Braun who had watched the youngster’s cover song videos. In 2008 he was signed to RBMG Records. It was at the age of 16 that Justin released his debut studio album My World 2.0 and it comprised the single “Baby” that is a huge hit even today. He was soon labelled as the ‘teen idol’. There are Beliebers, the Canadian singer’s ardent fans, across the globe, who eagerly wait for his songs to be released and listen to it on loop. GRAMMYs 2021: Justin Bieber Pens Open Note to Express Disappointment for Not Being Nominated in the R&B Category.

Justin Bieber, who celebrates his 27th birthday on March 1, is one of the world's best-selling music artists. He has earned some of the most prestigious awards in his musical career that includes a Grammy Award, two Brit Awards, and many other accolades. He is regarded as one of the most influential people in the world. On the occasion of Justin’s birthday, let’s take a look at his six best songs that are loved not only by Beliebers, but every music lover would love to listen on loop. 'Anyone' Music Video: Justin Bieber Turns Boxer, Covers All His Tattoos in His New Song.

Baby – The song had elements of ‘uptempo R&B, blending together dance-pop and hip-hop’. It was a commercially successful track in numerous countries. The section ‘Baby, Baby baby oh. Like baby, baby baby oh’ is the catchphrase of this track.

Eenie Meenie – It is a dance-pop number by Sean Kingston and Justin Bieber. The former’s reggae influences and latter’s R&B vocals was lauded by music critics. The song has more than three million likes on YouTube.

Sorry – This track was from Justin Bieber’s fourth album titled Purpose. “Sorry” is a ‘dancehall pop, tropical house and moombahton’ song. It is a cool number with warm island rhythms.

Cold Water – The song was recorded by Major Lazer featuring vocals from Justin Bieber and Danish singer MØ. It is a mid-tempo song, beautifully choreographed and a well-directed number.

I Don’t Care – This single, a dancehall-influenced number, was from Ed Sheeran’s album No.6 Collaborations Project. The song not just became a worldwide hit, but it gained the top spot in 26 countries.

Anyone – The song was released on New Year 2021. Talking about this soothing number, the Canadian singer had stated, ““Anyone” is such a special, hopeful, anthemic song. It sets the tone for a brighter new year full of hope and possibility.”

These are the songs of the young pop-star that anyone would love to hear on loop. We wish Justin Bieber a very happy birthday!

(The above story first appeared on LatestLY on Mar 01, 2021 09:10 AM IST. For more news and updates on politics, world, sports, entertainment and lifestyle, log on to our website latestly.com).