Kim Kardashian Gets a Hologram of Her Late Father for Her 40th Birthday, Courtesy Hubby Kanye West (Watch Video)

Kim K took to Instagram and shared her birthday gift from husband Kanye West which was none other than a hologram of her late father, Robert Kardashian. Check it out. 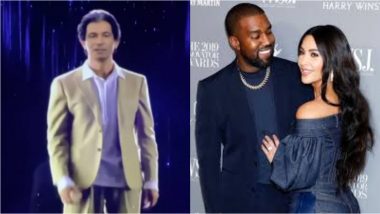 Hollywood sensation Kim Kardashian West celebrated her birthday last week at a private Island with a few private people. Although, it's been a week since Kim turned 40, but looks like the revelations from her birthday are not over yet. As recently, Kim took to Instagram and shared her birthday gift from husband Kanye West which was none other than a hologram of her late father, Robert Kardashian. In an emotional post, Kim K thanked her hubby for quite a thoughtful gift straight from heaven. Kim Kardashian Throws a Lavish 40th Birthday Party to ‘Pretend Things Were Normal,’ Netizens Remind Her ‘People Are Dying’ With Memes and Jokes.

In the video, Robert can be seen wishing Kim and saying, "You're 40, and all grown up." "You look beautiful, just like when you were a little girl. I watch over you, and your sisters and brother, and the kids, every day," he adds. Ahead, we also get to see him talking about his personal memories with Kim. That's not it, as the figure also comments on Kim's support for Armenian heritage, her business and more. Kim Kardashian Turns 40: Paris Hilton Extends Heartwarming Birthday Wishes For Her Best Friend (View Post).

For my birthday, Kanye got me the most thoughtful gift of a lifetime. A special surprise from heaven. A hologram of my dad. ✨🤍 It is so lifelike and we watched it over and over, filled with lots so tears and emotion. I can’t even describe what this meant to me and my sisters, my brother, my mom and closest friends to experience together. Thank you so much Kanye for this memory that will last a lifetime ✨

FYI, the figure in the video also tags Kanye as the most genius man in the whole world. Well, we bet nothing beats this gift by Kanye for wife Kim. Robert Kardashian, Kim's father died of cancer at the age of 59 in 2003. He's also dad to Khloe, Kourtney and Rob Kardashian. Stay tuned!

(The above story first appeared on LatestLY on Oct 30, 2020 08:52 AM IST. For more news and updates on politics, world, sports, entertainment and lifestyle, log on to our website latestly.com).