Maleficent: Mistress of Evil is the sequel to the 2014 film Maleficent, and has Angelina Jolie and Elle Fanning in the lead. The movie also stars Sam Riley, Imelda Staunton, Juno Temple, Chiwetel Ejiofor, Ed Skrein, and Michelle Pfeiffer. 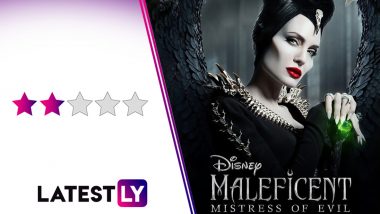 Maleficent: Mistress of Evil Movie Review: After redeeming herself as a not-so-cruel Fey by the end of the last movie, Maleficent (Angelina Jolie) finds herself back to being labelled Evil in the short passage of time, when the sequel begins. Well, I don't know what exactly is the length of that passage of time. Except, Elle Fanning, who plays Aurora, looks nearly the same, but Prince Phillip looks less like Brenton Thwaites and more like Harris Dickinson. Ah, anyway, Aurora, who is now the Queen of the magical Moors, gets engaged to Phillip, the heir apparent to Ulstead. Maleficent, who still doesn't trust the humans, isn't in favour of the match, but agrees for hero goddaughter's sake. And neither is Phillip's mother, Queen Ingrith (Michelle Pfeiffer), though she wants to the marriage to happen for her own nefarious reasons. Aishwarya Rai Bachchan Turns Maleficent in the New Hindi Promo of Maleficent: Mistress of Evil (Watch Video).

A disastrous luncheon at Phillip's palace, that looks like it is orchestrated out of an Ekta Kapoor show, ends up creating a division between Maleficent and Aurora. Aurora believes that her mother is back to her evil ways. Hurt, Maleficent finds out that there are more Dark Feys like her in hiding, fearing the humans. They are now looking to her to lead them in a battle against the humans, while Ingrith is making her own preparations to wipe out the magical folk, once and for all.

The 2014 film Maleficent was about giving a new spin to the fairy tale Sleeping Beauty by telling it through the 'evil' witch's POV. It was not a great film, but Maleficent was worth a watch for Angelina Jolie, and the touching relationship between the witch and the Princess.

Mushy, yes. But also quite adorable.

In comparison, the sequel, Maleficent: Mistress of Evil, directed by Joachim Rønning, commits two big rookie mistakes, among its many other flaws. First, it keeps Angelina Jolie out of action for large expanses of narrative and not let her do much, before giving her a Captain Marvel moment in the over-stretched action-packed climax. Which means after an interesting first act, the middle portions lag big time and don't offer much to a viewer to invest in.

Secondly, it screws up the poignant dynamics between Maleficent and Aurora that was built in the first film, with its half-baked dramatic twist. And yeah, it keeps them apart for too long. Which is sad, because the little portions that I connected with the film happened when it focused on Maleficent and her 'Beastly' together.

It's another matter that Aurora has suddenly turned into this silly girl borrows the same annoying traits we hated in Sansa Stark in the first couple of seasons of Game of Thrones. Speaking of that HBO show, there seems to be a lot of influences of GoT on the writers of this film. There is even a Red Wedding-like sequence, involving fairies, Holy Mother of Dragons!

I think the main reason why Maleficent: Mistress of Evil didn't really get to me, unlike the first film, is its obstinacy to veer away from being a fairy tale, even if the film is all about fairies, mushroom people and Maleficent's inconsistent powers. At one point, Queen Ingrith declares, 'This is not a fairy tale'. Pray, tell me, what exactly is a fairy tale in your lands? Sure, the visuals are eye-pleasing and VFX is good. I was impressed with the sequence in the start of the film that pans over Moors and its magical inhabitants. Similarly, the over-wrought climax doesn't let you down visually. Maleficent: Mistress of Evil Actress Elle Fanning Feels Women in Hollywood Are Projected As ‘Super Jealous’.

But when the magic is not there in the writing or in the making, no amount of visual hocus-pocus can save your movie. Maleficent 2 just sucks in that department, as it can't figure out whether to go really dark or stick to childish humour.

Watch The Trailer of Maleficent: Mistress of Evil here:

Even the talented cast is not given much to do. Angelina Jolie and Elle Fanning do good with what their skewered roles demand them to. Michelle Pfeiffer as the antagonist struggles to make her paper-thin character go beyond the adjective 'Simply Evil'. I simply cannot fathom why Chiwetel Ejiofor would agree to be a part of this film that makes him do almost the same thing as what he did in Doctor Strange. At least, the Marvel movie ended with a promise of giving him an interesting arc in the sequel. No such luck here! Harris Dickinson's bland performance makes the idea of Prince Charming redundant.

- Angelina Jolie, Whenever She is Made To Do Something

- Too Much Mishmash of Other Movies

In a film that is about magical creatures of every kind (including rip-off's of Groot), Maleficent: Mistress of Evil inexplicably lacks the magic to make it work into a beautiful fairy tale. Why, the movie doesn't even let Angelina Jolie live upto her new title. Maleficent: Mistress of Evil is only worth a watch for the actress' screen-presence and the visual appeal.

(The above story first appeared on LatestLY on Oct 17, 2019 12:45 AM IST. For more news and updates on politics, world, sports, entertainment and lifestyle, log on to our website latestly.com).