Margot Robbie Birthday Special: From The Suicide Squad to The Wolf of Wall Street, 5 Best Movies of the Barbie Star to Watch!

With movies like The Suicide Squad and The Wolf of Wall Street, Robbie has made the summer movie season so exciting for the last few years. Not only that, but some of her films even went on to receive Oscar nominations, and that just speaks so much about her talent. 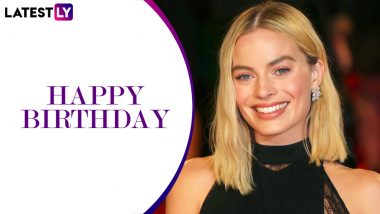 Margot Robbie is an icon and ever since her debut, she has just caused massive waves in the entertainment industry. Robbie has portrayed such iconic roles and starred in acclaimed films, that she is probably one of the most popular actresses working today. With her filmography filled with some really good films, you’re assured an entertaining time. Barbie: Margot Robbie Punches Groper in This Set Video From Greta Gerwig's Film; Ryan Gosling's Ken Lets Out a Hilarious Scream (Watch Video).

With movies like The Suicide Squad and The Wolf of Wall Street, Robbie has made the summer movie season so exciting for the last few years. Not only that, but some of her films even went on to receive Oscar nominations, and that just speaks so much about her talent. So, to celebrate Margot Robbie’s 32nd birthday, let’s take a look at five of her best films to watch.

With her second appearance as Harley Quinn, Margot knocked it out of the park once more as it sees her work with a team of individuals to take down the crime lord Black Mask. With some great action choreography and a story that’s filled with hilarious moments, this is a treat for every DC fan.

Once Upon a Time in Hollywood

Quentin Tarantino’s revisionist look at Hollywood just saw a bunch of movie stars hang out around the lot, and it was one of the best films of the year. Featuring Margot Robbie in the role of Sharon Tate, she was joined by Leonardo DiCaprio and Brad Pitt for a film that played to the director’s great strengths. Barbie: Margot Robbie and America Ferrera Roller-Skate in This Viral Set Video From Greta Gerwig's Film (Watch Video).

The Wolf of Wall Street

Martin Scorsese and Leonardo DiCaprio bring their eccentric energy to this biopic about Jordan Belfort’s take over of New York’s Wall Street. Seeing how Belfort’s company pulled one of the biggest frauds ever, this is a story of rising to the top and losing everything. Margot Robbie charms up the screen as she portrays Naomi Lapaglia, Belfort’s second wife.

Robbie’s Oscar contending role, I, Tonya saw her in the role of Tonya Harding and told the real-life story of her attacking her rival Nancy Kerrigan in 1994. Robbie is amazing in this role and it really sees her give a career best performance.

From the devilishly enjoyable mind of James Gunn, comes a blood-soaked adventure where guts fly like a pack of confetti shot in the air. Featuring a brand-new team with the return of Rick Flag and Robbie’s Harley Quinn, this is one DC film that you definitely need to check out. The Suicide Squad Movie Review: James Gunn’s DC Epic Is a Violent Delight (LatestLY Exclusive).

Here is hoping Robbie returns to play Harley Quinn soon. With this, we finish off the list and wish her a very happy birthday.

(The above story first appeared on LatestLY on Jul 02, 2022 10:27 AM IST. For more news and updates on politics, world, sports, entertainment and lifestyle, log on to our website latestly.com).