Mary Poppins Returns Trailer: Emily Blunt as the Magical Nanny Arrives to Save the Banks' Kids in This Musical Adventure - Watch Video 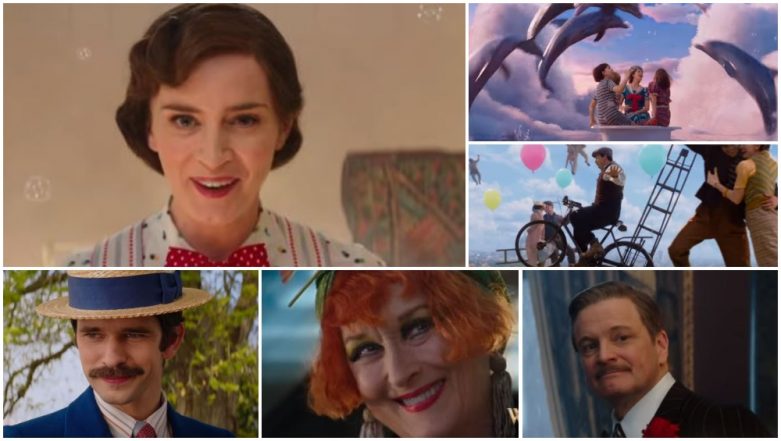 Disney is making a fortune with its live-action remakes of children's tales. Movies like The Jungle Book, Beauty and the Beast, Christopher Robin have been money-spinners for the studios and they are looking to score another hit with the upcoming Mary Poppins Returns. Starring the acclaimed actress Emily Blunt who was last seen in the hit horror thriller A Quiet Place, it is the remake of the 1964 film Mary Poppins. Christopher Robin Movie Review: Ewan McGregor Makes Friends With Winnie The Pooh in This Endearing Trip Down the Memory Lane.

Emily, who would be replacing Julie Andrews as the magical nanny from the heavens, is joined by an ensemble cast. Mary Poppins Returns also stars Ben Whishaw, Emily Mortimer, Lin-Manuel Miranda, Julie Walters, Colin Firth, Meryl Streep and Angela Lansbury. Dick Van Dyke is the only actor retained from the original film. The new trailer has landed and it shows a colourful, musical adventure film that has Poppins return to save the grown-up Banks kids from bankruptcy and add a little magic and music in their lives. Mary Poppins Returns Teaser Trailer: Emily Blunt Arrives from the Skies As Our Favourite Guardian Angel.

Mary Poppins Returns is directed by Rob Marshall, who is known for making Chicago, Pirates of the Caribbean: On Stranger Tides and Into The Woods. The movie is scheduled to release on December 19 worldwide.