Meryl Streep Birthday Special: 5 Most Popular Roles of the Acting Legend That Left Us in Awe!

Meryl Streep is one of this generation’s most influential actors. Streep is often regarded as one of the greatest actors working today in Hollywood and has made sure to bring a great performance in all of her films. 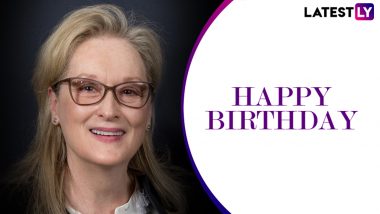 Meryl Streep is one of this generation’s most influential actors. Streep is often regarded as one of the greatest actors working today in Hollywood and has made sure to bring a great performance in all of her films. Even if the film is lackluster in some way she makes sure to be a highlight in it and brings in a great performance. Having started her career in the 1970’s, Meryl Streep has garnered over 21 academy awards nominations and has won three of them, and a record 32 Golden Globe Award Nominations, winning nine of them. Meryl Streep Birthday Special: 10 Lovely and Powerful Quotes From the Brilliant Actress From Her Popular Movies.

With the 72nd birthday of this iconic actor coming up, we are taking a look at five of Streep’s most iconic roles.

Directed by Phyllida Lloyd, the film is a biographical drama based on the life of Margaret Thatcher played by Meryl Streep. Thatcher is a British politician who was the first and longest serving Prime Minister of the United Kingdom. While The Iron Lady’s story was criticised a bit for it being bland, Streep’s performance as Thatcher went on to receive critical acclaim and is considered by many as one of her best roles.

This 1985 film is an adaptation of a novel of the same name written by William Styron in 1979. It stars Meryl Streep as Zofia “Sophie” Zawistowski, a Polish immigrant with a dark secret from her past who shares a boarding house in Brooklyn with her tempestuous lover Nathan and young writer Stingo. Sophie’s Choice received acclaim upon its release with a lot of it being aimed towards Streep’s performance which landed her the Academy Award for Best Actress.

This biographical drama stars Meryl Streep as the nuclear whistle-blower Karen Silkwood, a labour union activist who died in a car crash while investigating alleged wrongdoing at the Kerr-McGee plutonium plant where she worked. She was joined by Cher and Kurt Russell while Silkwood was directed by Mike Nichols. The film was praised for its emotional melodrama and was considered by many as “a very moving work.”

Directed by David Frankel, The Devil Wears Prada is a satirical comedy-drama fantasy film that stars Meryl Streep as Miranda Priestly, a powerful fashion magazine editor, as she is joined by Anne Hathaway playing the role of Andrea Sachs, who goes to New York and lands a job as Priestly’s assistant. The film has developed quite a following of its own as it was praised for its actors' amazing performances, especially that of Streep’s.

When talking about Meryl Streep Kramer vs. Kramer always pops up in the conversation as he gives one of her best performances in the film. It follows the story of a couple who are going through a divorce and how it affects their son. It stars Dustin Hoffman as Ted Kramer while Streep plays the role of Joanna Kramer. The film received praise for it’s amazing handling for its subject matter and how it showcased views on parenting.

(The above story first appeared on LatestLY on Jun 22, 2021 09:21 AM IST. For more news and updates on politics, world, sports, entertainment and lifestyle, log on to our website latestly.com).