Meryl Streep on Her Upcoming Netflix Film 'The Laundromat': ‘It's a Black-Hearted Joke Played On All of Us’ 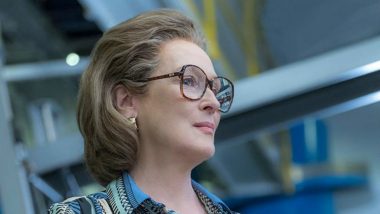 A still from the movie The Post (Photo Credits: Movie Still)

Veteran actress Meryl Streep says her upcoming film on Panama Papers, "The Laundromat", tells a "black-hearted joke", played on everyone. Helmed by Steven Soderbergh, The Laundromat looks into the investigation into the Panama Papers through the lens of dark comedy. In the Netflix film, Streep essays role of a widow who is forced to look into the financial scam after the death of her husband. At the Venice Film Festival, Soderbergh and Streep asserted that the film addresses a very serious subject, reports "variety.com". Steven Soderbergh, Meryl Streep Talk About Why ‘The Laundromat’ is in Comic Genre

"This is an entertaining, flash, funny way of telling a very, very dark, black-hearted joke, a joke that's being played on all of us," Streep said. The actress added that some people lost their lives while investigating the scam. She was refereeing to the death of Daphne Caruana Galizia, a journalist who was using the Panama Papers to investigate corruption. She was killed by a car bomb in 2017. "Some people died for it. This movie is fun, it's funny, but it's really, really important," Streep said. The Laundromat Trailer: Meryl Streep Chases After Rich, Fights to Recover Millions (Watch Video)

To this, Soderbergh added: "We decided that a dark comedy would have the best possible chance of remaining in the minds of the viewers and also gave us the opportunity to use the complexity of these kind of financial activities almost as a joke, almost as a setup for a punchline. Otherwise…(viewers) would feel as if they were being educated as opposed to entertained." The film also stars Gary Oldman and Antonio Banderas.

(The above story first appeared on LatestLY on Sep 02, 2019 04:57 PM IST. For more news and updates on politics, world, sports, entertainment and lifestyle, log on to our website latestly.com).