Millie Bobby Brown rose to global fame with Stranger Things, where she plays the kid with some superhuman powers, Eleven. But the 16-year-old actress feels her latest character, Enola Holmes, is more powerful than Eleven. 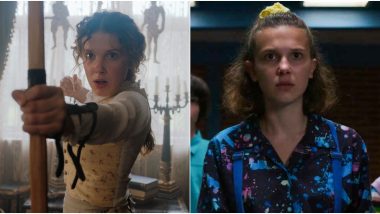 Millie Bobby Brown rose to global fame with Stranger Things, where she plays the kid with some superhuman powers, Eleven. But the 16-year-old actress feels her latest character, Enola Holmes, is more powerful than Eleven. In the Netflix movie, she plays Sherlock Holmes' sister who embarks on a dangerous mission. In an interview with Variety,  Millie was asked if she considers Enola to be a superhero. "One hundred percent, yeah! I think she’s more of a superhero than Eleven," she said. Enola Holmes Ending Explained: How Millie Bobby Brown's Character Cracks The Mystery Ahead of Henry Cavill's Sherlock Holmes (SPOILER ALERT).

She explained that you don’t have to have superpowers to be a superhero. Well, true. Black Widow is a superhero without superpowers. Millie further added, "I think that Audrey Hepburn was a superhero. I think she’s my superhero. It’s like Princess Leia — she’s my superhero too. I think Enola’s a superhero in her own right because she embraces every aspect of her flaws and her imperfections. That’s what makes people superheroes, when they can come to terms with the fact that they’re not perfect, but they’re unapologetically themselves. I love that. So she’s definitely a superhero. You don’t have to have superpowers to be one." Enola Holmes Movie Review: Millie Bobby Brown, Henry Cavill’s Netflix Film Is a Delightful Entertainer With A Feminist Spin.

The actress also said, "There’s a big message of feminism within the film, talking about how women were classed as uneducated back in the 1800s, and Enola was extremely educated, and so is her mother. She’s going into the city of London, where women aren’t listened to, nor respected, nor looked at as an equal. Enola is coming into it thinking, “How? Why?” She’s a new thinker; she’s a wild child. There’s so many messages in there that you have to look for and find your one, but mine is definitely the biggest message of all, which was feminism."

(The above story first appeared on LatestLY on Sep 25, 2020 04:26 PM IST. For more news and updates on politics, world, sports, entertainment and lifestyle, log on to our website latestly.com).