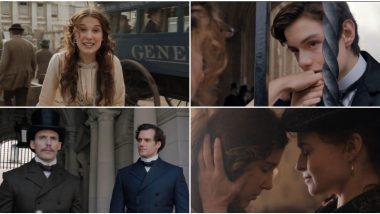 Sherlock Holmes, the famous fictional detective created by the late Sir Arthur Conan Doyle, has seen many adaptations, including two movies featuring Robert Downey Jr and a popular BBC series, starring Benedict Cumberbatch. Now after Iron Man and Doctor Strange, it is now the turn of 'Man of Steel' Henry Cavill to take on the role in the new Netflix film that came out on September 23. Only that the focus is not on him, but on Sherlock's 16yo sister, Enola Holmes, played by the talented Millie Bobby Brown, popularly known as Eleven in Stranger Things. Enola Holmes Movie Review: Millie Bobby Brown, Henry Cavill’s Netflix Film Is a Delightful Entertainer With A Feminist Spin.

Brown, who is also the producer, plays the lead in Enola Holmes based on the series of book written by Nancy Springer, that serve as a spinoff for Sherlock Holmes. Sam Claflin plays Mycroft, the eldest Holmes sibling who is also an arrogant government bureaucrat. Helena Bonham Carter plays their mother, Eudoria, who disappears on the 16th birthday of Enola, leaving her in the care of her brothers, who wants to make a proper lady out of her.

However, Enola shares her mother's independent streak and her brother's investigative flair, so she sets out to find out where her mother has gone to. On the way, she meets the young Viscount Lord Tewksbury (Louis Partridge), who is being chased by a relentless killer.

Directed by Harry Bradbeer of Fleabag fame, Enola Holmes is based on the first of Nancy Springer's book series, The Case of the Missing Marquess. There are two mysteries in the film - that of Enola's missing mother, and why the Viscount is being targeted. The movie ends with Enola solving both the cases, earning Sherlock's respectful chuckle and beginning on a new path, as England looks for a historic change. So what happens there? Here's us explaining the finale of Enola Holmes. Needless to say, HUGE SPOILERS AHEAD!

Since the movie is based on The Case of the Missing Marquess, let's consider that as the main mystery of Enola Holmes. After Tewksbury helps Enola escape from her boarding school, instead of returning to London and hiding there, Enola drives them back to Basilwether, to Tewksbury's home. She figures out the reason why someone is trying to kill him is that since he is a royal, he can cast a vote in the upcoming assembly when they are deciding on making voting a right for all citizens, thus empowering women. Tewksbury's decisive vote could make this reform a possibility, which doesn't go well with the prudes.

Enola suspects it is his uncle, who she also thinks killed Tewksbury's father, and now wants to kill him to inherit the wealth. At the mansion, they are nearly ambushed by the assassin, but Enola, through her ingenuity, brings him down. But it turns out that it is Tewksbury's grandmother The Dowager (Frances de la Tour), who had sent the assassin. After thinking she killed her grandson (he was saved a hidden armour), The Dowager confesses that she did so to protect her country, only for Tewksbury to come 'alive' and tell her that her time is over. This goes on to show that it is not just the patriarchal men who suppresses the women, but also some from their own gender.

Sherlock also cracks the case, revealing the fact to Inspector Lestrade (Adeel Akhtar) at the latter's office. He reveals that Tewksbury's uncle is innocent of the murder of his brother, for he was at war, going by the medals in his uniform. Lestrade informs him, though, that Sherlock is a day late, as his sister has already cracked the case. Sherlock is, expectedly, shocked, but also lets out an appreciative chuckle as he leaves Lestrade's office.

To be fair to Sherlock who seemed bested by Enola, he was only late in solving the Tewksbury case, because he was interested in it at the last moment. Also he cracked it, without even going to the house, just by a mere newspaper clipping, while Enola solved the mystery nearly at the cost of her life and only after the real killer revealed herself. Enola may have a flair for being a detective, but Sherlock still possess superior deductive skills. Henry Cavill to Return as Superman! Actor Reportedly Signs a New Three-Film Deal with Warner Bros.

England Heads For A Change So Does Enola's Love Life

Tewksbury's decisive vote helps in bringing voting reforms in the Parliament. Before he does that, Enola meets him. She rejects his offer to stay at his house (implying a marriage proposal), but clearly she has enough feelings for him, saying he can never get rid of her. She also blushes when he kisses her hand. If there is a sequel to the film, we hope to see if their romance blossoms.

Enola correctly deciphers a code posted in the newspaper as not a message from her mother, but from Sherlock, who asks her to meet near the Royal Academy. Mycroft and Sherlock are waiting for her there. Sherlock is confident that Enola had cracked his code, and knows it's him. Mycroft is disappointed by both Enola not turning up and what happened at the Parliament. Sherlock also proposes taking Enola under his wings, which Mycroft accepts.

As the brothers leave, Sherlock finds Enola's toy there, making him realise that Enola is there after all. Enola is later seen disguised as a newspaper vendor boy. As to why she didn't meet her brothers, it's maybe because she still didn't trust Mycroft and she wants to seek her own path now.

The Return of Eudoria

The movie finally also shows what Eudoria was upto in the end, When Enola returns to her new quarters, to her surprise, she finds her mother waiting for her there. Eudoria, who had been planning a series of non-lethal blasts in London, with her suffrage group, realises that Enola did (by saving Tewksbury, who helped in the reform being passed in the Parliament), was a much better way of changing things. She hugs her daughter, but she presumably leaves after that, as she and her group would most probably work on other avenues to empower women. Millie Bobby Brown Reveals She Hit This Major Milestone in Quarantine.

Enola, now out of her mother and brothers' care, seeks to make her own career as a detective. As an investigator, she still has a long way to go in being a Sherlock, but she as smart as her brother and is also good at deciphering clues. She is seen starting small, glimpsed by a small scene of a mother and daughter feeding a lamb, which Enola presumably retrieved. She also says that though her name is spelt Alone backwards, that doesn't mean she has to be lonely to be independent, implying that she will give a future with Tewksbury a chance. Thus, the film does end with a hint of more of Enola Holmes adventures, as the camera pans up to show a lovely view of 19th century London.

(The above story first appeared on LatestLY on Sep 23, 2020 07:51 PM IST. For more news and updates on politics, world, sports, entertainment and lifestyle, log on to our website latestly.com).