Tom Cruise's motorcycle is BMW G 310 GS that is manufactured at the TVS Company's Hosur facility. So Mission Impossible 7 will have an Indian touch 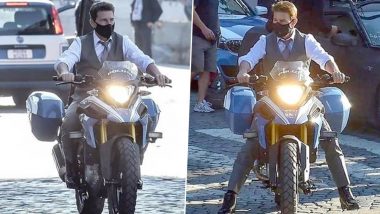 Tom Cruise has gone back to his shooting ways and the movie he is filming is the seventh installment of Mission Impossible. Yes, this franchise is still running and audiences just can't get enough of it. Recently, we shared with you a viral video of the actor atop a train waiting to do some deadly stunts for the film in Norway. Now we have his footage from the streets of Italy where he is driving a mean machine - BMW G 310 GS motorcycle. It has polizei written on it which means Police in Italian. But apart from the sleek design, it's the make that got our attention. It's a made-in-India model! Mission Impossible 7: Tom Cruise’s Stunt Atop A Speeding Train in Norway Goes Viral From Sets (Watch Videos)

Yes, you read right. BMW G 310 GS is manufactured at the TVS Company's Hosur facility. The car company had announced back in 2017 that BMW G310R and G310 GS will be manufactured in the same facility and will be distributed globally thereafter. Automobile critics were fairly apprehensive about whether or not TVS could match up to BMW's finish but when they hit the road they were damn impressed. Looking at Tom Cruise riding a bike which is made in our own country really makes us proud.

Tom Cruise was recently spotted riding a BMW G 310 GS motorcycle on the sets of MI:7 movie for an action sequence for the upcoming film in Rome, Italy. The actor rides the Italian Police-spec BMW G 310 GS bike. #TomCruise pic.twitter.com/tBLCxhLpHO

And that's how it's done

Cruise also did some stunts in a BMW car with no doors.

Is Tom Cruise Driving a BMW M5 Without Doors in Rome for MI7?! Probably! https://t.co/8QbgfLIZN4 pic.twitter.com/AywWbfsObi

Mission Impossible 7 will hit the theatres next year.

(The above story first appeared on LatestLY on Oct 13, 2020 02:57 PM IST. For more news and updates on politics, world, sports, entertainment and lifestyle, log on to our website latestly.com).