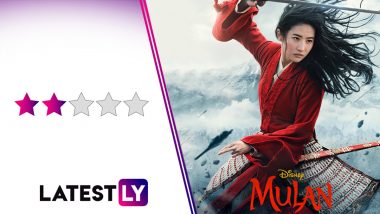 Mulan Movie Review: Disney's live-action remake of its 1998 animated film Mulan can be described as a beautiful tragedy. No, it doesn't render you into tears by the end of it, unless you have the habit of crying out of boredom. Mulan is visually striking, alright, but by the end of it, you realise that Disney has just made a movie that exists to extract money out of you because you once loved their animated movies. The Jungle Book might be a visual achievement, Beauty and the Beast and The Lion King were just ho-hum, but Mulan is outright droll! And the absence of a scene-stealing Mushu has something to do with it too. OTT Releases Of The Week: Liu Yifei’s Mulan on Disney+ Hotstar, Gitanjali Rao’s Bombay Rose on Netflix, Bryan Cranston’s Your Honor on Voot Select.

Like with the original film, the remake also is about a young girl called Mulan (Yifei Liu) in a conservative 16th century China. But unlike the original where she was an ordinary girl turning a hero in an extraordinary dilemma, Mulan we meet here is already a superhero. Thanks to an under-explained 'chi', Mulan can attempt some superhuman gravity-defying feats even as a child.

While her father (Tzi Ma) is agreeable to her skills, her mother isn't very pleased and wants her to suppress who she is, just so that they can find the right match for her. Around the same time, her kingdom is attacked by a warrior tribe led by the ferocious Bori Khan (Jason Scott Lee).

In order to protect the kingdom, the Emperor (Jet Li) orders a decree where at least one man from from each household should enlist in the army. Mulan's father, a former soldier, volunteers to do so, even though he is old and injured. To save his life, Mulan steals his sword and and armour and runs away from the house to join the army, disguised as a man so that she can protect her family's honour.

In retrospect, the live-action adaptation, directed by Niki Caro, could have been a decent fantasy film, if it was not for the fact that Mulan faces two huge hurdles. One, it is releasing not in theatres in most countries thanks to COVID-19, but on Disney+, thus robbing it of some positivity. Second, and truly a bigger hurdle, the huge, looming shadow of how fantastic the original continues to point out how inferior the remake is in nearly every aspect, be it its screenplay to its direction to even the performances!

In trying to make the remake more realistic, Mulan has been stripped of most of the fun elements from the original, which includes its humour, songs and above all, Mushu the dragon, that was so brilliantly voiced by Eddie Murphy. That doesn't mean that the remake is shorn of magical elements. For one, there is a shape-shifting witch Xianniang (Gong Li), and there is a phoenix. So it feels like a dumbfounded decision to throw away one of the best aspects of your original film. Damn, this movie desperately needed a Mushu!

And what does the remade Mulan achieve by being errr.... pseudo-realistic? We have most of the weakly-written characters put up their most serious faces, even when the situation doesn't ask for that. Even the lead Yifei Liu ends in being confined to a couple of expressions.

Some of the character motivations remain woefully inexplicable. Like, take Xianniang for example. She is shown as to be very powerful, as she can turn into an eagle or a swarm of bats at will. She also possesses Mystique-like powers and even turn into any person. Xianniang wants her independence in an male-dominated society that sees her as a witch. But we are clueless as to why she would choose to work with Bori Khan, who frequently insults and demeans her. Also, why doesn't he doesn't use her to kill the Emperor, when she can go into any quarters and disguise herself as any of the imperial staff?

Similarly, also take the case of the lead Mulan herself. In the original, we see her struggle in a man's world, trying to be a warrior in a testosterone-dominated arena. Her initial struggles and later, her using some immaculate shrewdness and skills to turn into a fantastic fighter is what made Mulan's journey so special. In the remake, though, Mulan is already special thus rendering any kind of feminist message the film wants to permeate to be moot.

Even disappointing is how the Mulan remake handles certain crucial moments of the film, that was beautifully done in the original, rushing them in the process. Like, that sequence where Mulan determinedly takes on her father's responsibility of being a warrior. Or her finally deciding to come out of man's garb and reveal her gender during a battle, which is so blandly done.

Speaking of battles, it is annoying to see how unimaginative most of the action sequences in Mulan are, especially considering we have seen better sequences in other movies based in China. Hero, Crouching Tiger, Hidden Dragon, Once Upon A Time in China are just a few examples, a couple of which also has Jet Li. While the visual effects are not bad and Mulan is gorgeously shot (cinematography by Mandy Walker), there are certain scenes where you can point out the use of green screens.

Mulan also underuses most of its prolific supporting cast. Jason Scott Lee looks like a wannabe Genghis Khan and is stuck in a onenote villain role. Donnie Yen is just there as the commander of Mulan's outfit. Thankfully for the horribly wasted Jet Li, Mulan is only the second-worst thing he is in that came out on an OTT platform in the last couple of weeks.

- Suffers From an Uninspired Remake Treatment

Should you watch Mulan? Even you haven't watched the original animated feature film, you might find the remake to be okayish at best. Still, it is highly recommended that you watch the original for a much better experience. And if you have watched the animated feature, please skip this to save yourselves two hours of disappointment. Both the Mulan's are streaming on Disney+ Hotstar.

(The above story first appeared on LatestLY on Dec 04, 2020 09:03 AM IST. For more news and updates on politics, world, sports, entertainment and lifestyle, log on to our website latestly.com).