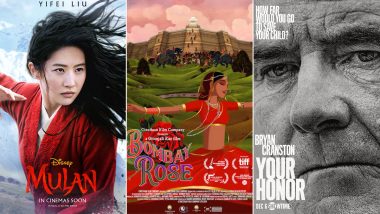 The year is about to end as we proceed to December 2020 and the big OTT release of the week is undoubtedly Disney's Mulan which is coming to Disney+ Hotstar on December 4. Liu Yifei, Donnie Yen film was earlier available for a pay-per-view basis will now be accessible for the Disney+ Hotstar subscribers and what a time to release it just before the year ends. Next big ott release to look forward is Gitanjali Rao’s acclaimed animated movie Bombay Rose that was premiered at the 2019 Venice Film Festival as well as the 2019 Toronto International Film Festival. Audiences can watch this beautiful love story on Netflix as it premieres on December 4. ‘Netflix’s The Crown Should Be Called A Work Of Fiction’, Demands UK Cultural Secretary Oliver Dowden

Bryan Cranston's legal drama Your Honor is a 10-episode mini-series that premieres on Voot Select on December 6. The Breaking Bad star will set in the shoes of a veteran judge to deliver justice as the show is originally inspired from the Israeli show Kvodo. The judge's son is involved in a hit-and-run that leads to a high-stakes game of lies. However, an Indian series of the same name was earlier premiered on Sony LIV that featured  Jimmy Sheirgill and Varun Badola in lead roles. Other interesting releases to catch up includes Swara Bhasker's Netflix show Bhaag Beanie Bhaag that releases on December 4, Abhishek Bachchan's Pro Kabaddi team Jaipur Pink Panther's docu-series Sons of the Soil, Netflix's Selena: The Series based on the life of singer Selena Quintanilla Perez and More. So let's take a look at every OTT releases of the week. Karan Johar Is Okay If Fabulous Lives of Bollywood Wives Made Many Cringe As It Takes Number 1 Spot On Netflix’s Top 10 Chart In Five Countries

(The above story first appeared on LatestLY on Dec 02, 2020 02:01 PM IST. For more news and updates on politics, world, sports, entertainment and lifestyle, log on to our website latestly.com).