Priyanka Chopra is all set to play a superhero in a Netflix show titled as We Can Be Heroes and hence is away from her family for a while. However, a picture is going viral on Instagram where Nick is standing helplessly as his brothers kiss their respective wives at an event. 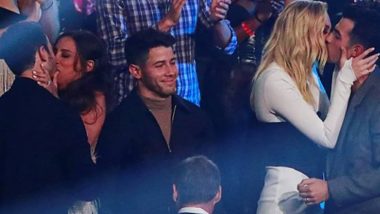 Priyanka Chopra and Nick Jonas' adorable moments are always captured by the fans and the papz somehow. The Bollywood actress and the American singer have never been media-shy and always treat their fans with mushy, PDA filled snaps. However, this time a picture is going viral where Nick is seen visibly missing his gorgeous wifey. Also, in the pic are Kevin Jonas-Danielle and Joe Jonas-Sophie Turner kissing each other passionately.

The snap went viral in no time as the singer looks cute as his 'Jonas' brothers are having their romantic moment amid the crowd. It was hearty to see him and Joe later on bonding after the incident. The fans were totally in awe of him and could not help but feel sad for him.

For the uninitiated, Priyanka has been away for a while owing to her work commitments. Desi girl is all set to play a superhero in a Netflix show titled as We Can Be Heroes. A picture of her from the sets recently got leaked on the social media. She was seen posing along with the director, Robert Rodriguez and a bunch of kids, near an ice cream truck. She is seen sporting a bob hairstyle for the role. She is also prepping up for her Hollywood film on Ma Anand Sheela. Soon, PeeCee will kick-start the promotions of Bollywood film The Sky Is Pink along with Shonali Bose and Farhan Akhtar. A lot's on the global icon's plate right now so Nick might have to spend some more days missing his gorgeous wife!

(The above story first appeared on LatestLY on Aug 27, 2019 05:29 PM IST. For more news and updates on politics, world, sports, entertainment and lifestyle, log on to our website latestly.com).