Olivia Wilde Roped In To Direct Female-Centric Movie For Marvel, Is It Their New Spider-Woman Movie?

Hollywood actress Olivia Wilde who has now turned her focus to making movies after starring in some best works in both films and television, has been roped in by Sony Pictures to direct their next Marvel Universe movie reported Deadline. 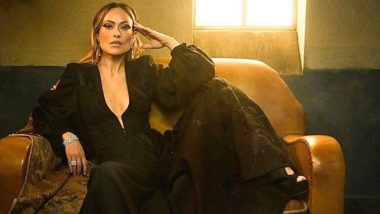 Yes yes, you all can get excited!! Actress and Director Olivia Wilde, who is currently busy with her psychological thriller Don't Worry Darling, that will be going on floors soon, has bagged yet another meaty project. The actress who has now turned her focus to making movies after starring in some best works in both films and television, has been roped in by Sony Pictures to direct their next Marvel Universe movie and in all probability, it will be their Spider-Woman movie, reported Deadline. Olivia Wilde Birthday Special: 7 Times the Actress Proved She's a Red Carpet Darling (View Pics).

The portal's report read, "Sources tell Deadline that Olivia Wilde has closed a deal to direct and develop a secret Marvel film project revolving around a female character in the universe. While not confirmed, it is expected that the story will be centered on Spider-Woman." Olivia Wilde to Direct and Produce Psychological Thriller ‘Don’t Worry, Darling’

This speculation was confirmed when Olivia retweeted the story with a spider emoji, confirming the speculation that the movie she will be helming will indeed be Spider-Woman.

In fact, the report also read, "The project has been a high priority since the top of the year and Wilde came close to passing on it as her dance card has begun to fill up quite quickly. At the end of the day, the idea of having a chance to launch her own female superhero was too hard to pass up, and she eventually came around to fully committing to the project."

The film will be reportedly penned by Katie Silberman and produced by Amy Pascal.Rachel O’Connor will be the executive producer.This film also marks the reunion of Wilde, Silberman and Pascal who are also currently working on another film with Universal studios. Well, are you excited??!

(The above story first appeared on LatestLY on Aug 20, 2020 08:39 AM IST. For more news and updates on politics, world, sports, entertainment and lifestyle, log on to our website latestly.com).