Pamela Anderson celebrates her birthday on July 1. And so, on this special day, let's go back in time when the Baywatch babe danced to Madhuri Dixit's iconic song 'Dhak Dhak' on Salman Khan's show Bigg Boss. Video inside! 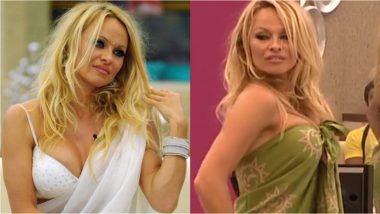 Baywatch actress Pamela Anderson celebrates her birthday today (July 1). The sensational star was recently in the news for marrying bodyguard Dan Hayhurst in an intimate backyard ceremony in Vancouver Island, Canada. And as the multi-talented diva turns 54 today, we thought of taking you back in time when she made her presence felt in India for Bigg Boss. Yes, you read that right! Pamela appeared in Bigg Boss Season 4 as a guest which was hosted by Salman Khan. She stayed inside the BB house for three days. Pamela Anderson Gets Married for the Fifth Time! Baywatch Actress Ties the Knot With Bodyguard Dan Hayhurst in an Intimate Ceremony (View Pics).

FYI, season four was filled with Indian celebs like WWE wrestler Khali, actors Sameer Soni, Dolly Bindra, Veena Malik, Ashmit Patel, and Shweta Tiwari, and many more. But if you happen to be a Bigg Boss fan, you cannot forget Anderson's dance moves to Madhuri Dixit's Dhak Dhak song from Beta. The Hollywood diva was seen wrapping a green clothe around her body and grooving to the Hindi track, while the men ogled at her. Pamela Anderson Accused by Husband Dan Hayhurst’s Ex for ‘Seducing’ Him Into Marriage.

Indeed, that's hot! Reportedly, Pamela was paid a bomb for appearing on the controversial reality show. She was given around Rs 2.5 crore for a three-day stint. Also, before entering the show, she had talked about Salman and more.

“I have heard about Salman through media. I have seen a few Bollywood films, but I don’t remember any of the actors by their name. Maybe, if I see him I will be able to recognise him,” PTI had quoted Pamela before making her way into the house in 2010. LatestLY wishes Pamela, a happy birthday!

(The above story first appeared on LatestLY on Jul 01, 2021 09:21 AM IST. For more news and updates on politics, world, sports, entertainment and lifestyle, log on to our website latestly.com).