Priyanka Chopra's show Quantico is on its last season, as the network, ABC channel, has ended its run in just three seasons. 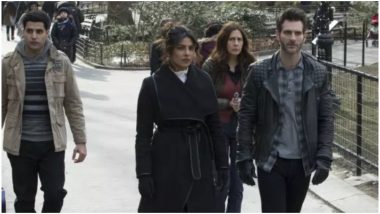 Priyanka Chopra's show Quantico is on its last season, as the network, ABC channel, has ended its run in just three seasons. Compared to the past two seasons which has 23 episodes, the ongoing one only has 13 episodes to offer a more compact premise to share with the audiences. However, like its previous seasons, Quantico continues to suffer from bad ratings and reviews, though Priyanka Chopra fans still swear by the show.

While we are about to bid adieu to the show, it looks like Quantico wants to go out with one controversial bang. The latest episode of the terrorism drama has created quite a stir on Twitter among some of the Indian viewers. Apparently, one of the threads of the episode is that certain terrorists are trying to blow up Manhattan. The issue is they turn out to be Indians and they are trying to place the blame on Pakistan!

This storyline has not gone down well with some Twitter users who have blasted the show and the lead actress Priyanka Chopra for agreeing to show her country in a bad light.

What the hell was this episode of #Quantico .. they tried to show ‘Indian nationalists’ (their term) trying to blow up Manhattan to frame Pakistan.. I don’t even know what sort of ridiculous narrative was this episode trying to set.. nonsensical stuff..

They try to wade into the India-Pakistan issue and come up miserably short.. the storyline is not just implausible, the narrative is faulty feels like them trying to create a false equivalence where none exists.. all this on a show with an Indian actress @priyankachopra .. sad

In this episode PC discovers a rudraksh mala (not kidding) on the terrorist and then then concludes that these are Indian nationalists trying to blow a bomb in NYC and blame Pakistan for it and that’s how the episode unfolds from there .. seriously ridiculous stuff.

Guys disagree with @priyankachopra all you want, question her all you want, but please don’t use abusive language in replies .. keep the conversations civil.

Now i know why the money hungry @priyankachopra is supporting #Rohingyas

This #RohingyaCrisis falls in line with promotion of #Quantico

She forgot that #rohingyaskilledhindus and there would be a backlash. Time to boycott her.

Is Priyanka to be blamed?

If this thread is true, I'm truly ashamed of @priyankachopra and her Ex Fauji brat legacy. You couldn't ask the #Quantico team to change the narrative? What do you think are we Indians? https://t.co/o0mctDDQSG

Have you seen the latest episode of Priyanka Chopra's Quantico? Do you agree with what the Twitterati are saying about the episode? Share your thoughts in the comments section below.

(The above story first appeared on LatestLY on Jun 04, 2018 01:08 PM IST. For more news and updates on politics, world, sports, entertainment and lifestyle, log on to our website latestly.com).