Red Notice: Dwayne Johnson Opens Up About His Upcoming Film, Calls It ‘Netflix’s Biggest Movie Ever’

The film was originally planned to release in theatres, but as with most recent films, production on 'Red Notice' was halted for some time due to the COVID-19 pandemic, until Netflix purchased the film from Universal in the summer of 2019. Red Notice is written and directed by Rawson Marshall Thurber, and is set to be released on the platform on November 12, 2021 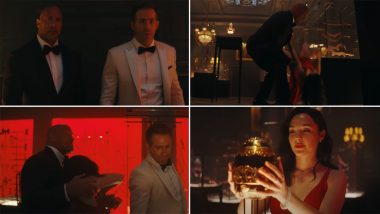 Actor Dwayne Johnson on Saturday showed off an exclusive clip from his upcoming movie 'Red Notice' that also stars Gal Gadot and Ryan Reynolds in lead roles. The Netflix subscribers were served with the power-packed exclusive clip of the upcoming movie 'Red Notice' at the Netflix promotional marathon 'Tudum: A Netflix Global Fan Event' on Saturday. As per The Hollywood Reporter, Johnson appeared through a special video screening during the event, to hype up the film addressing it as "Netflix's biggest movie ever" and "absolutely massive." Red Notice at TUDUM 2021: Gal Gadot in a Red-Hot Dress Overpowers Dwayne Johnson and Ryan Reynolds in This New Action-Packed Clip from Netflix (Watch Video).

In the upcoming movie, Johnson plays a top-notch FBI agent, John Hartley, who is tasked with bringing in the world's biggest criminals. His path to justice collides with two rival robbers mid-heist, Nolan Booth (Reynolds) and The Bishop (Gadot). Ultimately, he is forced to work with Reynolds in order to capture Gadot. Bursting with action, fights and explosions, the movie's exclusive clip sees the two officers beaten hard by Gadot during the fight. 'The Umbrella Academy' star Ritu Arya and Chris Diamantopoulos from 'Silicon Valley' are also members of this cast, however, their roles are yet to be disclosed. Red Notice Trailer Out! Ryan Reynolds, Dwayne Johnson, Gal Gadot's Thriller To Stream on Netflix From November 12 (Watch Video).

The film was originally planned to release in theatres, but as with most recent films, production on 'Red Notice' was halted for some time due to the COVID-19 pandemic, until Netflix purchased the film from Universal in the summer of 2019. The movie will be the streaming platform's most expensive film to date, with a budget reportedly around USD 200 million. 'Red Notice' has been directed and written by Rawson Marshall Thurber of 'Skyscraper' and 'We're the Millers' fame. Set to release on Netflix on November 12, the movie has been produced by Hiram Garcia, Johnson and Dany Garcia of Seven Bucks Productions, Beau Flynn's Picture Co. and Thurber's Bad Version, Inc.