Sam Raimi Birthday Special: From The Evil Dead to Spider-Man, 5 of the Cult Director’s Most Iconic Films 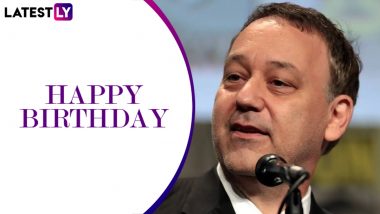 Sam Raimi is one of a kind director in Hollywood. No one knows how to mix camp and drama more brilliantly than him. A great storyteller in the horror genre, Raimi has created some of the most influential and iconic films in his career as a director. Starting with The Evil Dead, he would continue to have a successful career as he would land the gig of directing Spider-Man. Sam Raimi's Spider-Man 4 Throwback: From Cast to Plot, How The Shelved Superhero Film Would Have Turned Out If It Was Greenlighted.

With Spider-Man Raimi proved that he has a great eye for visual storytelling and that he can amazingly juggle a bunch of different characters. It is what made him a director to be on the lookout for. So to celebrate Sam Raimi’s 62nd birthday, we are taking a look at five of his most iconic films.

Drag Me to Hell

After making three Spider-Man films, Sam Raimi returned to the genre that made him popular. Starting with Drag Me to Hell, after denying an elderly woman her request, Christine Brown has a curse placed on her that promises to drag her to hell. The plot is campy but it has those great thrills that you would expect from Sam Raimi.

With Evil Dead II, Sam Raimi shifted gears a bit. Whereas the first film was a proper horror film with some black-comedy elements to it, the sequel was a straight up black-comedy. The plot is very similar to the first film, but that doesn’t matter at all just because of how much fun it is.

The one that brought Raimi into the spotlight, The Evil Dead is one of the best things to come out of the ‘80s. Following a group of five friends who go to a cabin and accidentally release an onslaught of demons, The Evil Dead will provide with some great thrills. Also it gave us the wonderful character of Ash Williams. Sam Raimi Confirms a New Evil Dead Movie Is Under Works and He Would Like to Direct Another with Bruce Campbell on Board.

Perhaps a cultural landmark in movie history, Spider-Man was a really big deal for the time it came out. Following Peter Parker who gets bitten by a radioactive spider and turns into the superhero that we all know and love, Spider-Man was responsible for creating a boom in the comic book movie genre.

Everything good that Spider-Man did, Spider-Man 2 did it even better. Seeing Spidey take on Doctor Octopus was amazing as the film was filled with a great plot and cutting edge visual effects for 2004. Raimi completely knocked it out of the park and created one of the best superhero films of all time.

I genuinely can’t wait to see Sam Raimi return to the superhero genre with Doctor Strange in the Multiverse of Madness. It’s going to be his first directorial work in a long time and it has me very excited. With this we finish off the list and wish Sam Raimi a very happy birthday.

(The above story first appeared on LatestLY on Oct 23, 2021 10:10 AM IST. For more news and updates on politics, world, sports, entertainment and lifestyle, log on to our website latestly.com).