Sam Raimi's Spider-Man 4 Throwback: From Cast to Plot, How The Shelved Superhero Film Would Have Turned Out If It Was Greenlighted

Sam Raimi redefined the superhero genre by telling a story that was true to the roots of the character and presented them in a way so that the audience could connect with him via Spider-Man. 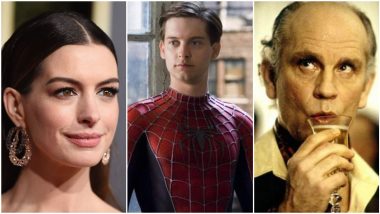 In 2002, Sam Raimi changed the superhero genre forever with Spider-Man. Telling the story of Peter Parker who gets bitten by a spider and turns into everyone’s favorite wall-crawler. He redefined the superhero genre by telling a story that was true to the roots of the character and presented them in a way so that the audience could connect with him. All of this was fueled by Tobey Maguire’s amazing portrayal of Peter Parker/Spider-Man that has defined the character ever since. Even after two live-action variations of the character, people still look back to Maguire’s portrayal as being the best. Loki: From Multiverse to 'DB Cooper', Fan Theories That Were Confirmed in the First Episode of Marvel’s New Disney+ Series (LatestLY Exclusive).

Sam Raimi would then go on to make two more sequels with Spider-Man 2 receiving critical acclaim from everyone while Spider-Man 3 wasn’t that well-received but still garnered its own cult following. All three films have their own status in pop culture and set a standard for what comic book films should be.

After the release of Spider-Man 3, Sam Raimi eventually signed on to make Spider-Man 4 under the condition that he get more creative freedom this time around, as during the production of the previous film he was required by the studio to include characters so that it could appeal more to the masses, hence the inclusion of Venom. Spider-Man 4 then received a release date of May 6th, 2011 while the production was set to begin soon. Sweet Tooth Review: DC’s Netflix Series Is a Sweet, Hopeful Journey Through a Dystopian World (LatestLY Exclusive).

Sony hired James Vanderbilt to develop a script, and Raimi shared his interests of what villains he would like to use. He wanted the lead antagonist to be Adrian Toomes aka The Vulture played by none other than John Malkovich (The Vulture would later be the villain of Spider-Man: Homecoming) and some leaked developments about the movie suggested that he would take over The Daily Bugle and cause Jameson to have a demotion. He also planned on paying off Dr. Curt Connors character by showing his transformation into The Lizard (The Lizard would then, later on, appear in The Amazing Spider-Man) and having him be one of the antagonists. He planned on having Bruce Campbell play the role of Mysterio as it would explain his cameos in all the previous Spider-Man films. Raimi also found his Felicia Hardy/Black Cat in Anne Hathaway who would be playing a different version of the character as some reports suggested.

The core cast from the previous films was set to return along with the new cast members mentioned on the top. Although Spider-Man 4’s development was a slow one as a lot of outlets were reporting at the time with Sam Raimi not being happy with a lot of the script treatments and there being creative differences among the director and the studio. Raimi eventually left the project which prompted Sony to cancel the project altogether and reboot the franchise. Quickly after the Spider-Man 4’s cancellation, Sony announced The Amazing Spider-Man for a 2012 release with Marc Webb attached to direct it and Andrew Garfield was cast in the role of Peter Parker/Spider-Man.  The Falcon and The Winter Soldier: 5 Important Easter Eggs That You Should Not Ignore From The First Three Episodes!

Sam Raimi would eventually talk about his experience on the development of Spider-Man 4 as being “exhausting” which prompted him to step down from the director’s chair as a film of that magnitude is too strenuous. Although due to a leaked animation of the storyboards in the past few days, you can see what the showdown between The Vulture and Spider-Man would have looked like but due to copyright issues, Sony has been taking down the video.

Sam Raimi returns to the superhero genre as he directs Doctor Strange in The Multiverse of Madness which is slated for a release next year while you can see the wall crawler’s next entry, Spider-Man: No Way Home hit theatres on December 17, 2021.

(The above story first appeared on LatestLY on Jun 16, 2021 04:00 PM IST. For more news and updates on politics, world, sports, entertainment and lifestyle, log on to our website latestly.com).