Shang-Chi and the Legend of the Ten Rings: From Lead Man Simu Liu to Return of Iron Man 3 Villain, All You Need To Know About Marvel's Superhero Film

Marvel Studios had a lot of announcements to make in the ongoing San Diego Comic-Con. They revealed Phase 4 of the Studio's plans and it includes Shang-Chi and the Legend of the Ten Rings! The film stars Simu Liu as Snag-Chi. 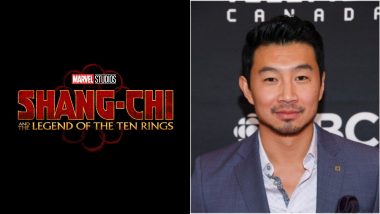 Marvel's Shang-Chi has been dormant for far too long! At the ongoing San Diego Comic-Con, the representatives of Marvel Studios, during their slot, revealed Phase 4 of Marvel movies. Needless to say, the line-up is mad beautiful! The fandom is surely going to have a ball as some of the best characters are being revived with a whole new decade of storylines in place. Amid them comes Shang-Chi! Marvel Phase 4 Films Revealed at San Diego Comic-Con 2019! From Black Widow to Thor 4, Here’s the Complete List of Films and TV Series

Played by Canadian-Chinese actor Simu Liu, Marvel has finally announced that the film of Shang-Chi will be taking place. Liu will be playing the superhero in Shang-Chi And The Legend of the Ten Rings. As per reports, Liu bagged the role just a week prior to the San Diego Comic-Con, which means that the studio is scouting to bring forth a new lieu of superheroes and a phase to surpass the third one! The film will also feature Tony Leung, who will essay the role of Mandarin! Awkwafina will also play a pivotal role in the film. However, details about her character are yet unknown. The film will be helmed by Destin Daniel Cretton (known for The Glass Castle and Short Term 12). Fans React to Natalie Portman Playing Female Thor in Thor: Love and Thunder and Not Everyone Is on Board with It

Just announced in Hall H at #SDCC, Marvel Studios’ SHANG-CHI AND THE LEGEND OF THE TEN RINGS, with Simu Liu, Awkwafina and Tony Leung, directed by Destin Daniel Cretton. In theaters February 12, 2021. pic.twitter.com/VXaqJ5uN6B

Slated for a February 2021 release, the script has been penned down by Dave Callaham. As a culmination to the Ten Rings organisation that was initially introduced in Iron Man, Shang-Chi will be facing off against them with his slick martial arts. Shang-Chi will be the third movie to be released in the fourth phase of Marvel, coming right after Eternals. Sure, we saw a glimpse of the powers of the Mandarin in Iron Man. But turns out, Tony Leung will be the real Mandarin, which means the challenges are going to be epic! Before we can get excited about the film, here's a question, how many of you know about Shang-Chi? Well, we presumed here's a superhero that you'll find out soon enough.

Thanks for getting back to me https://t.co/FFRuM03p20

Shang-Chi was originally created by writer Steve Englehart and artist Jim Starlin. The character first appeared in Special Marvel Edition #15, back in 1973. Proficient with his Fung Fu, Shang-Chi has several tricks up his sleeve like handling a gun, nunchaku and Jian with his wushu styles. He can also create several duplicates of himself! Shang-Chi is known to be the Master of Kung Fu! Well, has this piqued your interest in the upcoming superhero film? We should hope so because you're going to hear a lot about him from us!

(The above story first appeared on LatestLY on Jul 21, 2019 10:18 AM IST. For more news and updates on politics, world, sports, entertainment and lifestyle, log on to our website latestly.com).