Spider-Man No Way Home: Tom Holland’s MCU Film Closes In on No 3 Domestic Box-Office Spot Despite the Pandemic

After one weekend outside of the No. 1 slot, Spider-Man: No Way Home could be regaining its pole position in the domestic box office once again. 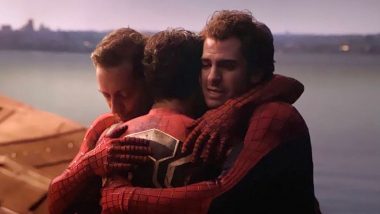 After one weekend outside of the No. 1 slot, Spider-Man: No Way Home could be regaining its pole position in the domestic box office once again. The Marvel entry and the slasher sequel 'Scream', according to 'Variety', are locked in a tight battle this weekend, but 'No Way Home' is projected to be just ahead of its competition. Andrew Garfield Reveals He Lied to Emma Stone About His Spider-Man No Way Home Role, Shares Her Reaction.

Columbia Pictures is projecting a $13.5 million gross for 'Spider-Man: No Way Home' over its sixth weekend at the domestic box-office, which is a soft 30 per cent drop from its previous outing. As 'Variety' puts it, "After practically redefining the rules of the pandemic era box office, the mega-hit MCU (Marvel Cinematic Universe) entry is finally beginning to wind down its theatrical run." Scream Dethrones Spider-Man No Way Home From Top Spot at US Box Office in Its Opening Weekend.

Analysts, meanwhile, are predicting that the Tom Holland-led movie may just topple 'Avatar' from the third spot in the list of highest-grossing films in the history of the North American box office. The release is expected to expand its domestic cumulative earnings to $720.4 million by Sunday. 'No Way Home' at present is the fourth highest-grossing film in the history of the domestic box-office.

(The above story first appeared on LatestLY on Jan 23, 2022 12:32 PM IST. For more news and updates on politics, world, sports, entertainment and lifestyle, log on to our website latestly.com).