Tobey Maguire Birthday Special: From Fighting Green Goblin to Returning in Spider-Man No Way Home, 6 of the Actor’s Best Moments as Marvel’s Webhead!

Sam Raimi and Tobey Maguire brought such a great amount of heart and love to this character that his portrayal defined a generation. Being many fans’ definitive portrayal of Spidey, Maguire surely earned the status of being a top five version of the webhead. 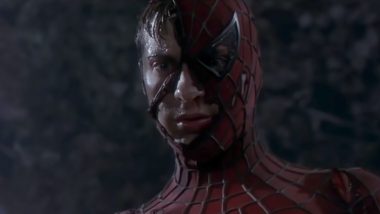 When talking about Spider-Man in cinema, the first thing that comes to your head is the portrayal of Tobey Maguire in the Sam Raimi films. Many actors and voice actors have brought their unique vision to Marvel’s iconic wall-crawler, but Maguire’s portrayal of the character has stuck with many since the first Spider-Man film came out in 2002. Spider-Man No Way Home: Tom Holland, Andrew Garfield, Tobey Maguire Announce MCU Film’s Extended Version in Theatres (Watch Video).

Sam Raimi and Tobey Maguire brought such a great amount of heart and love to this character that his portrayal defined a generation. Being many fans’ definitive portrayal of Spidey, Maguire surely earned the status of being a top five version of the webhead. So, to celebrate Tobey Maguire’s 47th birthday, let’s take a look at five of his best scenes as Spider-Man.

Uncle Ben said that with “great power comes great responsibility,” and the ending of Spider-Man gets this message through very well. One of the most relatable things about Peter is him sacrificing everything for the greater good. Him declining MJ’s love at the end of the first film, even though he has feelings for her, creates for a great ending.

Say what you want about Spider-Man 3, but you can’t deny that this ending is one of the most emotionally charged Spider-Man scenes. After a huge fight, Sandman reveals to Peter that he never wanted to kills his uncle and it was an accident. Peter finally gets rid of his guilt, and forgives Sandman for what happened.

Back in Red and Blue (Spider-Man 3)

Peter sees that MJ has been kidnapped by Venom and Sandman on the news, and the villain duo are taunting him to come out and fight. Rushing back home, he finally gets out his red and blue suit and becomes Spider-Man again after letting go the darkness that was consuming him.

The best part about Spider-Man: No Way Home was that it brought three generations of Spider-Man together. Watching Tobey Maguire, Andrew Garfield and Tom Holland’s version of the characters interact with each other was a great treat. Spider-Man No Way Home Movie Review: Tom Holland’s Marvel Film Is a Multiversal Celebration of the Iconic Avenger! (LatestLY Exclusive).

Spider-Man features some of the most brutal fight choreography that you will see in any comic book film. Willem Dafoe and Maguire pour out their heart in this raw fight scene as each hit is felt over here. If you want to see a grudge match that has an immense build up, this scene is for you.

Spider-Man 2 featured the most visually impressive fight scene in the series as Spidey and Doc Ock lay it all out on a train. Featuring both the rivals punch each other to Spider-Man saving a train full of people, it encapsulates everything great about this superhero and why so many people relate to him and love him. Tom Holland Birthday Special: His 5 Best Moments As Spider-Man in the Marvel Cinematic Universe (Watch Videos).

Here’s hoping we do get to see Tobey Maguire return as Spider-Man once more. His portrayal of Spider-Man truly is one of the best versions of the character. With this we finish off the list and wish Tobey Maguire a very happy birthday.

(The above story first appeared on LatestLY on Jun 27, 2022 10:07 AM IST. For more news and updates on politics, world, sports, entertainment and lifestyle, log on to our website latestly.com).