Star Wars – The Rise of Skywalker Movie Review: JJ Abrams’s Fan-Baiting Approach Stumbles in Its Attempt to Give the Sequel Trilogy a Befitting Closure 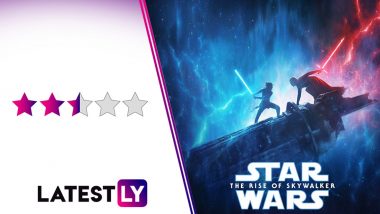 Star Wars - The Rise of Skywalker Movie Review: In the previous Star Wars film, The Last Jedi, Looper director Rian Johnson subverted expectations and experimented with the SW lore. This didn't go down well with all, and resulted in an fan backlash over how certain events and characters were portrayed. So if you are one among them who wasn't happy with Johnson's vision, dear Star Wars fan, rejoice! For a returning JJ Abrams has bowed down to your wishes and made a Star Wars film that ticks nearly every box of fan wish fulfilment. We Need Baby Yoda Emoji! Fans Start Petition to Make Emoticon of Their Favourite Star Wars Character.

Does that make The Rise of the Skywalker, the result of this SW fan fantasy, a good Star Wars film? Not so much, even though there is a lot that is happening on the big IMAX screen.

So what's happening this time? Without giving too many spoilers, let's give you a gist. Kylo Ren (Adam Driver) is determined to bring the galaxy under his reign, and he seeks a fallen power-figure to find the right direction. Meanwhile, Rey (Daisy Ridley) continues to train as a Jedi, this time under Leia (the late Carrie Fischer, brought back to life through deleted footage and digital effects). When she realises that the source of evil comes from a planet called Exelegon, Rey seeks to find a pathfinder that could take her there. Joining her in this mission are Finn (John Boyega), Poe Dameron (Oscar Isaac), C3PO ( Anthony Daniels), Chewbacca and BB-8.

As they jump from one unfamiliar terrain to another, Rey is also being seduced by Ren through their Force connection to come to the dark side. Will she or will she not, that's the question that lingers throughout the film, as we are introduced to new characters, old ones get sidelined or dumped or killed, while some fan-favourites return, either for the last hurrah or to seek their own spinoffs. It all ends in an explosive finale that treads a little too close to Avengers: Endgame, another Disney film that came out this year, and was a much more cohesive film.

As someone who closely followed the Star Wars saga and the various developments around it, I can pretty much understand the pickle JJ Abrams was in. He not only has to give the trilogy, that he helped kickstart with The Force Awakens, a befitting conclusion, Abrams also has to keep two main factions happy - the fans and the producers. Which means he has to distance himself from whatever Rian Johnson tried to do in The Last Jedi. One of the biggest repercussions of this is an extremely reduced role for Rose (Kelly Marie Tran), whose character in TLJ was (unfairly) the most ostracised. Instead, Abrams brings in another new character in Jannah (Naomi Ackie), a random person that Finn befriends, whom we are supposed to root for. Even though she only appears when half the movie is done. Disney Sends Out Warnings To Theatres Ahead Of The Release Of Star Wars: The Rise Of The Skywalker And It's For A Noble Cause.

JJ Abrams, for the gargantuan task he is given, doesn't disappoint as a director, though. As asked for, he had given us the most Star Wars movie ever that puts in everything we have liked about the franchise, and then goes on overstuffing the film with nostalgic nods, frenetic action sequences, different worlds and a new droid, DO, that helps Disney to sell more toys. The VFX is incredible as always, especially the scenes showing the destroyed Death Star. There are some awesome bits in between too, like Rey taking down Kylo's ship mid-air on a desert planet, and then them trying to size their Force powers on a spaceship. Or that the lightsaber battle between these two characters on the Death Star, that could be the film's Mr and Mrs Smith moment. It's another matter that the sequence ends by giving Kylo his 'Martha' moment.

But it's when he is trying to appease everyone is where JJ Abrams falters with The Rise of Skywalker. If Rian Johnson deliberately diverted from the tried-n-tested formula with The Last Jedi, JJ Abrams keeps it within the Star Wars template. So if The Force Awakens feels like a retread of A New Hope, then The Rise of Skywalker bears a close semblance to Return of the Jedi. When I mean 'close, I mean CLOSE!

Watch The Trailer of Star Wars: The Rise of Skywalker:

To some extent, the nostalgic values do work in the film's favour and give some memorable moments with a few returning characters. Add John Williams' iconic score, and it feels perfect. Or it should.

Instead, The Rise of Skywalker harks a bit too much into what made George Lucas' original trilogy so iconic, that it loses its own identity. Like the manner in which Emperor Palpatine (Ian McDiarmid) is shoehorned in the saga (ruining The Last Jedi's ending in the process) and making him the overlord of everything bad that happened in the trilogy. It makes very little sense, since we are basically given no such clue in the last two movies. That's just one of the many loopholes in the script of The Rise of Skywalker.

The nostalgic dependency also robs the protagonists of the new trilogy their own charisma. Every actor does their bit in the most decent manner possible, but it is really hard to care for their characters. The sudden development of making Rey, Poe and Finn bickering besties in this one isn't a very fleshed out idea, though some of their bickering is MCU-like amusing. Especially when C3PO is involved. The only character interaction that I really cared for was between Rey and Kylo, which has some really good scenes. But even that ends in a very awkward subtext.

At least, I expected the action sequences to be good. Instead, Abrams allows most of the scenes to go on an overdrive, using some vert fast camerawork and editing, making us difficult to track what exactly is happening. It really feels like the makers took a page out of the final season of Game of Thrones and want to wrap up things in a hurry, despite the film being 142 minutes long.

- A Couple of Unexpected Cameos

- Some of the Action Sequences

- Too Much Fan Devotion

Star Wars: The Rise of Skywalker is everything that Star Wars fans want from the film. And yet, it still results in being one of the most underwhelming films of the franchise, not exactly helping the sequel trilogy justify its existence. Other than to mint more money for the overtly rich Walt Disney Co, of course.

(The above story first appeared on LatestLY on Dec 20, 2019 03:39 PM IST. For more news and updates on politics, world, sports, entertainment and lifestyle, log on to our website latestly.com).