The Batman is an upcoming DC film directed by Matt Reeves. The film is getting an overwhelming amount of praise with much aimed towards its tone and story. 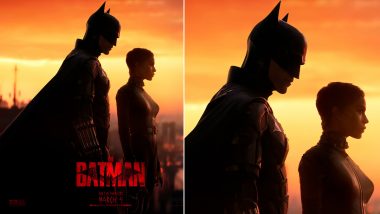 To no one's surprise, The Batman has opened to glowing reviews from the critics. Robert Pattinson's DC film is directed by Matt Reeves and sees Batman in his second year of crime fighting. The movie also stars Paul Dano as the Riddler. The Batman sees our Caped Crusader go after the Riddler who has been killing city officials, and in doing that also uncovers his own family secrets. The Batman Movie: Review, Cast, Plot, Trailer, Release Date - All You Need to Know About Robert Pattinson, Zoe Kravitz's DC Film!

Critics are lauding the film as one of the best interpretations of Batman every put on screen. Many are praising the noir aspects of The Batman and are calling it a true dark and gritty adventure. At the time of writing this, the movie has a score of 94 percent on Rotten Tomatoes. Let's check out what some of the critics are saying about the movie. The Batman: New Clip of Robert Pattinson's DC Film Debuts During GMA; Shows Dynamic Between Bruce Wayne and Alfred! (Watch Video).

ComicBook.com: The Batman is the most visually-stunning Batman movie, ever. Matt Reeves and his cinematographer, Oscar-nominee Greig Fraser (Dune), have captured the iconography of Batman, his supporting cast, and Gotham City better than any filmmakers before them. What was visually sold in trailers proves true across the course of the film: every scene is wonderfully constructed and composed, both visually and sonically, thanks to the haunting score by Oscar-winning composer Michael Giacchino.

Den of Geek: Nevertheless, to not recognize The Batman as a magnificent achievement would be to miss the cave for the bats. It’s also worth remembering that Nolan didn’t make The Dark Knight during his first time at the plate—it came after Batman Begins, a film which seemed like a game-changer in its time but appears safely bound by formula in retrospect. And rest assured Reeves sets up more to come.

The Hollywood Reporter: With his Planet of the Apes installments, Matt Reeves demonstrated that big studio franchise movies based on iconic screen properties didn’t have to exclude intelligent, emotionally nuanced storytelling. The same applies to The Batman, a brooding genre piece in which the superhero trappings of cape and cowl, Batmobile and cool gadgetry are folded into the grimy noir textures of an intricately plotted detective story. Led with magnetic intensity and a granite jawline by Robert Pattinson as a Dark Knight with daddy issues, this ambitious reboot is grounded in a contemporary reality where institutional and political distrust breeds unhinged vigilantism.

IGN: The Batman is a gripping, gorgeous, and, at times, genuinely scary psychological crime thriller that gives Bruce Wayne the grounded detective story he deserves. Robert Pattinson is great as a very broken Batman, but it’s Zoe Kravitz and Paul Dano who steal the show, with a movingly layered Selina Kyle/Catwoman and a terrifyingly unhinged Riddler. Writer/director Matt Reeves managed to make a Batman movie that’s entirely different from the others in the live-action canon, yet surprisingly loyal to Gotham lore as a whole. Ultimately, it’s one that thoroughly earns its place in this iconic character’s legacy.

CNET: It's long, it's frequently slow and it's crushingly bleak. But The Batman deserves that definitive article. It's "The" Batman because it evokes many previous incarnations of the Caped Crusader while still bringing something distinctive. This darkest Dark Knight may not be for everyone (and certainly not kids), but it's a gripping and nerve-shredding Bat-thriller.

(The above story first appeared on LatestLY on Feb 28, 2022 11:06 PM IST. For more news and updates on politics, world, sports, entertainment and lifestyle, log on to our website latestly.com).