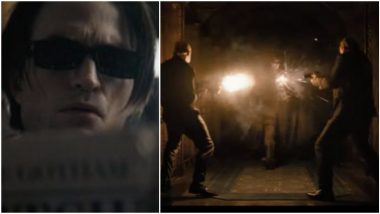 The trailer of Matt Reeves' The Batman had been dropped at DC Fandome 2021, and holy sh!t! It was awesome. The broody tone, the spectacular visuals, and some terrific character designs give this Robert Pattinson starrer plenty of promise to beat The Dark Knight into being the best Batman movie there is. And of course the action scenes. Particularly standout being, the Hallway fight scene. The Batman Trailer: Robert Pattinson’s Broody Bruce Wayne, Zoe Kravitz’ Dynamic Catwoman Make a Deadly Combo!

Reminding us of similar scenes in Rogue One: A Star Wars Story, Oldboy and Netflix's Daredevil, the hallway sequence in The Batman sees the caped crusader in his bulletproof suits take on some gun-toting goons with ease. What is terrific about the scene in the trailer is the way it plays with light and darkness, even though the frame is static.

Watch the sequence in the Trailer below:

The Hallway sequence has been singled out in the trailer by the Twitterati who was blown away by the scene:

Will go down in the history as one of the most iconic hallway fight scenes ever !#TheBatman pic.twitter.com/Q89nXTJOUM

This was EVERYTHING we wanted AND MORE!

Zoe Kravitz's Selina Kyle aka Catwoman has also been receiving a lot of praise. With some amazing footage and some stunning action scenes, looks like The Batman could easily be one of the best blockbusters of 2022, if not the BEST! The Batman: New Posters of Robert Pattinson’s Film Unveiled Ahead of DC FanDome.

(The above story first appeared on LatestLY on Oct 17, 2021 03:19 AM IST. For more news and updates on politics, world, sports, entertainment and lifestyle, log on to our website latestly.com).