The King's Man Trailer: Ralph Fiennes and His Team of Spies Indulge in Amazing Sword Fights in This Action-Packed Promo (Watch Video) 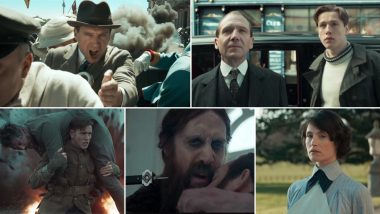 The second trailer of The King's Man is here and it looks even more intriguing than before. The film is set in the era of World War I. The film with its amazing cast essaying the roles of historical figures has certainly piqued our interest. It stars Ralph Fiennes as T. E. Lawrence, Gemma Arterton as Mata Hari, and Rhys Ifans as Grigori Rasputin. This is the origins story in the Kingsman franchise that has already had two successful films, Kingsman: The Secret Service and Kingsman: The Golden Circle. The King's Man Teaser Trailer: History Meets Action in This Origins Story as Secret Agents Take On Rasputin (Watch Video).

While the first trailer had caught our attention with its characters, the second trailer promises us action. We see everything from gun battles to sword fights and one of the biggest highlights is the amazing soundtrack. Black Sabbath's "War Pigs". The story follows Fiennes and his team trying their best to stop history's worst villains who are plotting the war.

The screenplay is written by Jane Goldman, Matthew Vaughn, co-written by Karl Gajdusek; based on the comic book The Secret Service by Mark Millar and Dave Gibbons. 20th Century Fox will release Vaughn's The King's Man in theatres on February 14, 2020.

(The above story first appeared on LatestLY on Sep 30, 2019 02:08 PM IST. For more news and updates on politics, world, sports, entertainment and lifestyle, log on to our website latestly.com).