The Lion King Teaser Trailer: Get Ready to Relive Your Childhood With Jon Favreau’s Remake of the Classic

The long wait till July 2019 would be worth it! 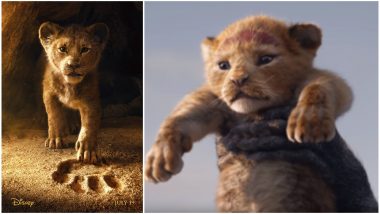 We are so grateful to Disney for letting us relive our childhood once again. The production house is all set to remake the iconic 1994 masterwork, Lion King and going by its first teaser trailer, we know the long wait till July would be worth it. The remake features an elaborate star cast of big Hollywood actors including Donald Glover as Simba, Beyoncé as Nala, and James Earl Jones reprising his role as Mufasa through voiceovers. Produced by Walt Disney and directed by Chef actor and Iron Man director, Jon Favreau, the movie is sure to take you on a trip down the memory lane. Keira Knightley Bans Daughter from Seeing These Disney Movies.

The short one and half minute teaser revolves around Rafiki presenting a young Simba to the members of the Pride Lands; not to miss the iconic shot of Simba being hoisted above the rock. While the teaser has some very brief moments that will pique your interest in the film, it's the narration by James Earl Jones as Mufasa that further makes it intriguing.

Watch the teaser trailer below

For the ones who don't know, Lion King is about Simba who is destined to be the new ruler of the Pride Lands. However, his uncle has some evil plans planned for him. The original classic won two Academy Awards and its remake shows the same potential. Jon Favreau, who earlier directed The Jungle Book, the film which was lauded for it brilliant live-action animation seems to be the ideal choice for the remake of a classic as the Lion King. This is one movie where we can't say 'we hope' but in fact, 'we are damn sure' that it will justify its original work and would give no reason to complain. The film will hit the screens on July 19, 2019.

(The above story first appeared on LatestLY on Nov 23, 2018 09:17 AM IST. For more news and updates on politics, world, sports, entertainment and lifestyle, log on to our website latestly.com).