all my bloods are looking better and I finally got some sleep last night...." Green posted on Instagram. 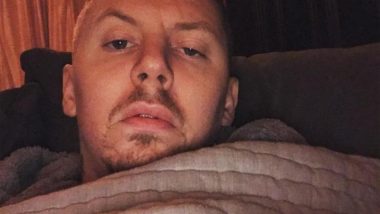 London, Apr 2 (PTI) Rapper Professor Green has revealed he nearly died due to his health problems last year. The 34-year-old rapper suffered a series of complications, including a collapsed lung and pneumonia, after undergoing a five-hour operation to remove three areas. "It nearly killed me but I'm fine now. Kind of. I should have been dead but I was still laughing. I'm still here," Green told Closer magazine.

The "Lullaby" hitmaker had previously opened up about his health struggles and the "torture" he had gone through. "I'm on the mend. Turns out I'm only the second person in the world to have an allergic reaction to the mesh used to fix my hernia. I've had a giggle on Instagram but here's the reality. I didn't want to worry anyone, least of all my nan. I came back to hospital with pneumonia, a partially collapsed lung, distension, fluid build up and ileus (my guts had shut down).

"I'm getting better. Everything is starting to work again, all my bloods are looking better and I finally got some sleep last night...." he had posted on Instagram.