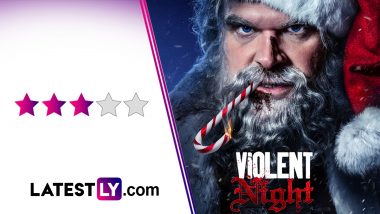 Violent Night Movie Review: Intruders in the home and a hammer-wielding Santa on the loose, Tommy Wirkola helms Violent Night that brings a John Wick-like flavour to our jolly-good ol' fellow. Painting Christmas red, this action-adventure sees Santa (David Harbour), who is suffering through a mid-life crisis, go on a rampage when intruders take over the house of a wealthy family and holds them at gunpoint. Bonding with Gertrude Lightstone (Leah Brady), the youngest of the family, he goes on a journey that helps restore back his spirit in the Holidays once more. Strange World Movie Review: Jake Gyllenhaal’s Animated Adventure is An Uninspired Romp Falling Short of Disney’s Magic (LatestLY Exclusive).

The best part about Violent Night is David Harbour’s miserable turn as Santa. Beginning with him sat up in a bar describing just how tiresome the Holiday spirit has become for him, Harbour seems to have the most fun here than he has had in any other role. Also you definitely would love to see him hammering down bad guys. Which is weird, because he is Santa and he is killing people, yet Violent Night makes the best use of its camp concept. 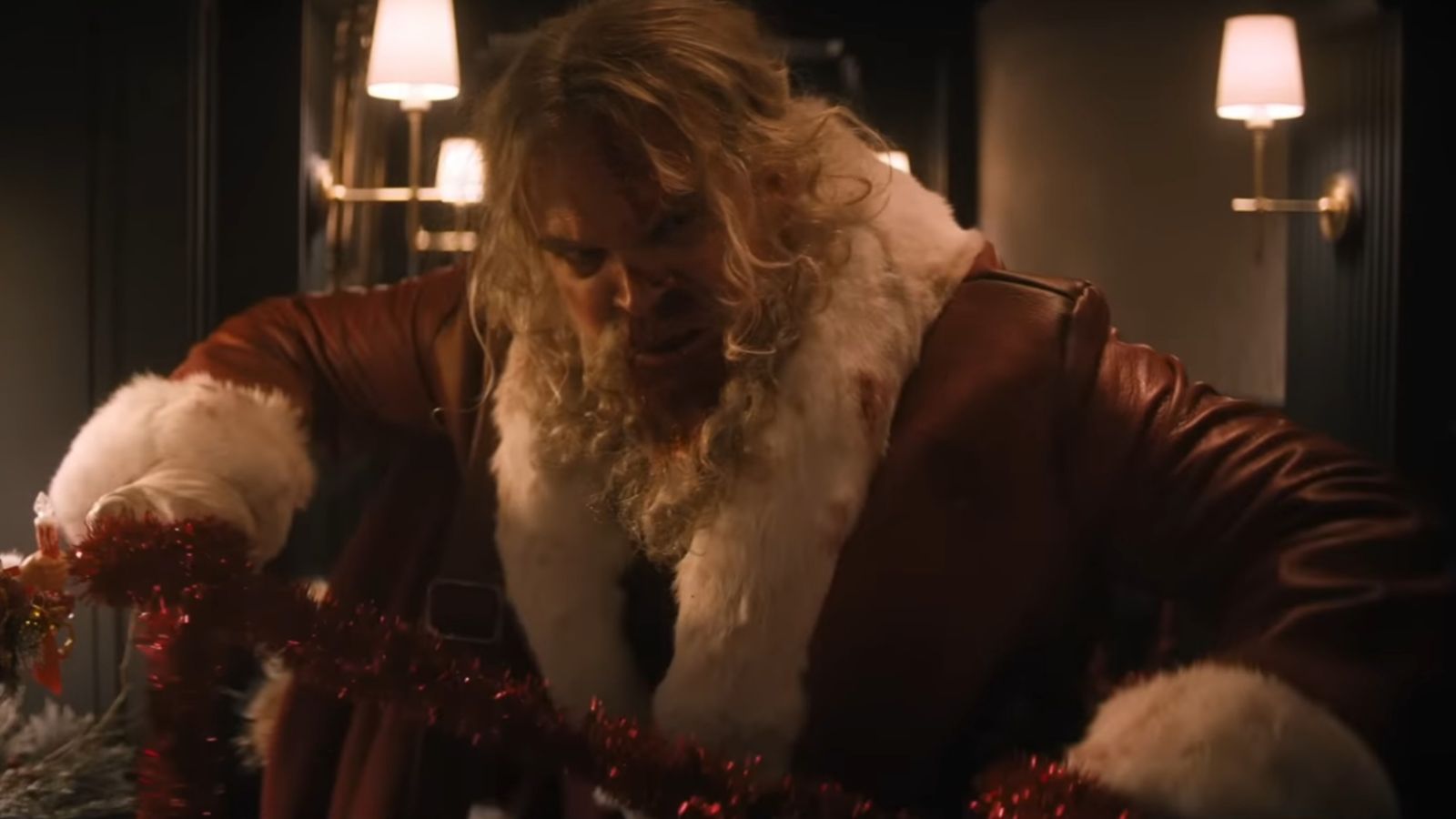 Matching David’s energy is the Leah Brady’s Gertrude “Trudy” Lightstone too, who never gets annoying. With child actors, there is usually a tendency of that happening, yet Leah never outstays her welcome and has some good chemistry with David that helps develop both these characters. With Santa its about coming to terms with his own issues, while for Trudy its making sure that her broken-up parents get back together with the Christmas magic.

Violent Night does occasionally fail when it focuses on the bigger story though. The Lightstone family has its own side-plot here that deals with shady business secrets at the core of it, and the villains lead by John Leguizamo’s Scrooge are as cartoonish as they come making them feel like they were plucked right out of Home Alone 3. It's in these moments where the film slows down, the overcomplication that never works when all you want to see is the 'Violent Santa' ram down baddies.

However, if there is one side-plot here that does work well, it's that of Alex Hassell’s Jason Lightstone and Alexis Louder’s Linda Matthews. Estranged couple and also Trudy’s parents, their plot does help with in fleshing out Trudy’s character and hones in on the sweet Christmas magic.

The humour does hold up quite well though, at least occasionally. Using enjoyable situational comedy in having a drunk Santa talking about how miserable his life has become, while Cam Gigandnet’s Morgan Steele, a wannabe action star, brings a flavour of silliness to it all. However, there are some moments of low-brow humour here that don’t really land in the way the filmmakers might have intended them to. 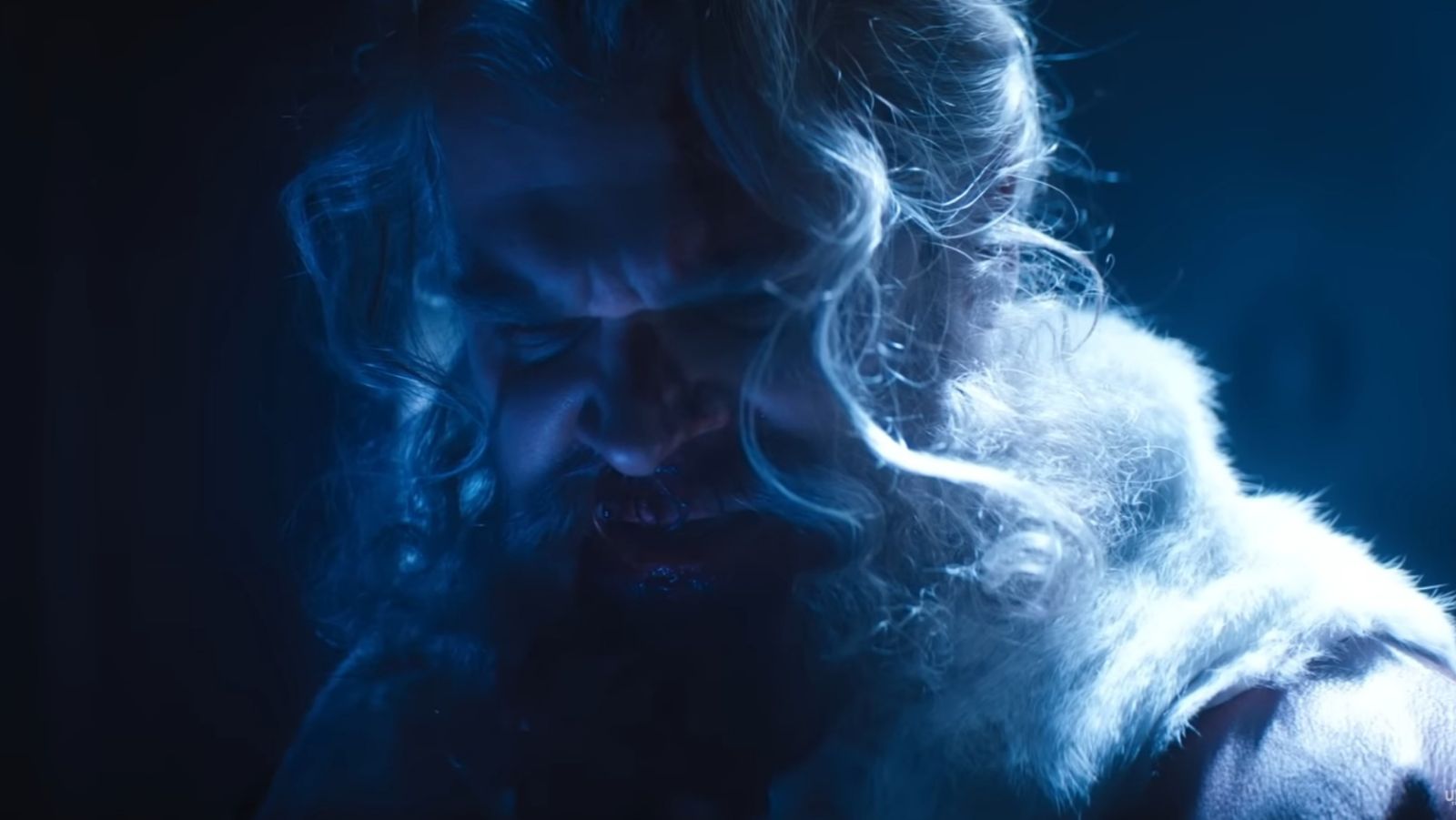 But like I said before the movie is at its most entertaining when Violent Night does pack in a good number of action scenes. Bullet Train Movie Review: Brad Pitt, Aaron Taylor-Johnson’s Blood-Soaked Thriller Revels In the Tongue-In-Cheek Chemistry of Its Cast! (LatestLY Exclusive).

A sequence riffing on Home Alone’s Kevin weaponising a room to deliver a world of pain to his enemies, or Santa shoving a Christmas ornament in someone’s eye socket and flipping on the switch to fry their brains out, Violent Night is filled with creative kills that will make you go “ooh that’s harsh.” It’s all shot fairly well not relying heavily on jump cuts, and when I saw David Leitch’s (the man behind John Wick and Bullet Train) name listed in the credits as one of the producers, it all made sense at the end.

Side-Plots Can Hinder the Pace

David Harbour’s violent turn as Santa Claus is something I didn’t know I needed, but am still glad that I witnessed. Sure, there are moments that don’t work here like out-of-place sex jokes, however, nothing beats Santa going on a rampage and painting Christmas red just like his jolly ol’ good suit. Overall, Violent Night is an enjoyable time. The film is playing in theatres right now.

(The above story first appeared on LatestLY on Dec 02, 2022 05:40 PM IST. For more news and updates on politics, world, sports, entertainment and lifestyle, log on to our website latestly.com).