IFFI 2022: Spanish Film 'I Have Electric Dreams' Wins Best Film; Check Out Other Winners From the Ceremony!

Iranian writer and director Nader Saeivar gets Silver Peacock for Best Director for No End, Filipino filmmaker Lav Diaz bagged Special Jury Award for When the Waves are Gone and more. Check out other winners from the ceremony! 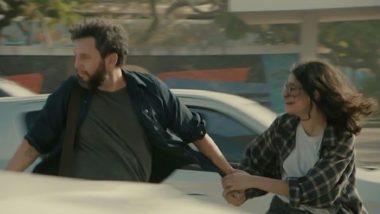 The 53rd edition of International Film Festival of India (IFFI) concluded on Monday with Spanish film I Have Electric Dreams directed by Valentina Maurel winning the prestigious Golden Peacock for the best film of the festival. The closing ceremony of IFFI was held at the Shyama Prasad Mukherjee indoor stadium in Taleigao on Monday. IFFI 2022 Winners: I Have Electric Dreams Wins Best Film; Chiranjeevi Is Indian Film Personality of the Year – Check Out Full List Here!

The 53rd edition of IFFI witnessed participation of filmmakers and cinema lovers from across the globe. Union Minister for Information and Broadcasting Anurag Thakur, MoS I&B L. Murugan, MoS Tourism Shripad Naik, Chief Minister Pramod Sawant and other dignitaries were present on the occasion.

"My commitment is to give strong emphasis to provide a platform to regional cinema. Because, regional is no longer regional... it has gone national and international. Cinema has played a vital role to reach Hindi language across the globe," Thakur said on the occasion. IFFI 2022: Jury Head Nadav Lapid Calls The Kashmir Files ‘A Propaganda, Vulgar Movie’; Says Vivek Agnihotri’s Film Was Inappropriate for a Prestigious Film Festival (Watch Video).

Iranian writer and director Nader Saeivar gets Silver Peacock for Best Director for No End, Filipino filmmaker Lav Diaz bagged Special Jury Award for When the Waves are Gone. Award for Best Debut Feature Film of a Director has been snatched by Asimina Proedrou for Behind The Haystacks and Praveen Kandregula has received Special Mention for Cinema Bandi.

France was the Spotlight country this year. As many as 25 feature films and 19 non-feature films from India were showcased in the Indian Panorama section, while 183 films will be a part of the international section. During inaugural, the Satyajit Ray Lifetime Achievement Award was bestowed upon veteran director Carlos Saura, who along with Luis Bunuel and Pedro Almodovar is considered to be one of Spain's most renowned filmmakers. The award was received by his daughter Anna Saura Ramon.

(The above story first appeared on LatestLY on Nov 28, 2022 11:05 PM IST. For more news and updates on politics, world, sports, entertainment and lifestyle, log on to our website latestly.com).