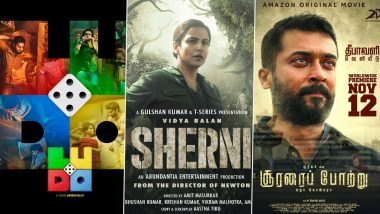 Vidya Balan-starrer Sherni, anthology Ludo, Soorarai Pottru featuring Suriya and Biswajeet Bora's directorial God on the Balcony have been nominated for top honours at the Indian Film Festival of Melbourne (IFFM) 2021. The award ceremony will take place virtually on August 20. The festival is presented by the Victorian government in Australia. It is an annual festival that takes place in Melbourne, Australia now in its 12th edition, the IFFM 2021 has gone virtual as well as physical due to the global pandemic. Paka: Anurag Kashyap Produced Malayalam Film to Premiere at the 46th Toronto Film Festival.

This year the festival is launching three categories under the belt of web shows. The festival will recognise Best Series, Best Performance in a series each under the Actor and Actress category. This list of names includes extraordinary films of 2021 such as 'Ludo' directed by Anurag Basu, Vidya Balan-starrer 'Sherni' directed by Amit Masukar, 'Soorarai Pottru' (Tamil) that stars and is produced by Suriya and directed by Sudha Kongara and 'God on the Balcony', an Assamese film starring Harish Khanna and directed by Biswajeet Bora. Aditya Vikram Sengupta’s Bengali Movie Once Upon A Time In Calcutta to Premiere at 78th Venice International Film Festival.

This year's Best Documentary features some of the most compelling stories including 'Shut Up Sona', 'W.O.M.B', 'About Mumma', among others. Winners of Best Film, Best Indie Film and Best Documentary each win state-of-the-art camera from Black Magic Design apart from the award. Another key highlight is that the Best Film winner automatically gets a nomination nod under the Best Asian Film category at the annual prestigious AACTA (Australian Academy of Cinema and Television Arts Awards)

(The above story first appeared on LatestLY on Aug 05, 2021 02:43 PM IST. For more news and updates on politics, world, sports, entertainment and lifestyle, log on to our website latestly.com).