Grammy-nominated Indian-American songwriter-rapper Raja Kumari has released the official music video for her track 'Karma'. She says the track is a reminder that beautiful things come to life when strong women put their skills together. 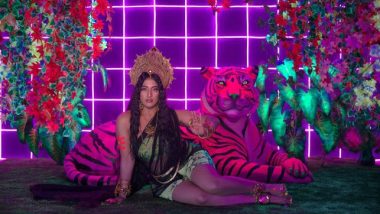 "'Karma' is a reminder that beautiful things come to life when strong women put their skills together," Kumari said. The colourful and empowering clip was created by an all-female team in collaboration with Kumari and Sam Madhu.

"The video was done by an all-female team. It started as a collaboration between myself and Sam Madhu, which explores transitions from art to reality and remixes cultural elements from the past and the future. It is inspired by traditional Indian aesthetics and futuristic cyberpunk worlds," she added.

Kumari says Madhu developed the idea of a neon universe in which I'm the central character, where traditional Indian elements like "Rakshasa masks, goddesses and tigers are reborn with contemporary, neon aesthetics to create a universe where I appear as an array of compelling, powerful female characters."

"So you'll see a latex matrix-inspired Rakshasi, a neon devi with her shocking pink tiger, a futuristic laser goddess. The video was so fun to make, and I feel like it represents a real female-empowerment moment," Kumari said.

The rapper released the video on the occasion of Dussehra on Tuesday. The colourful and empowering clip was created by an all-female team in collaboration with Raja and Madhu. Currently, Kumari is a judge on "MTV Hustle", the first reality-style Rap competition show.

(The above story first appeared on LatestLY on Oct 09, 2019 04:13 PM IST. For more news and updates on politics, world, sports, entertainment and lifestyle, log on to our website latestly.com).