Om Puri Birth Anniversary: From Tamas To Kakaji Kahin - Five Shows Of The Actor That Made Television A Better Place

On Om Puri's birth anniversary, let us tell you about a few of his TV shows that were as great or even better than the movies that he did. This was the time when Indian Television was in its golden age! 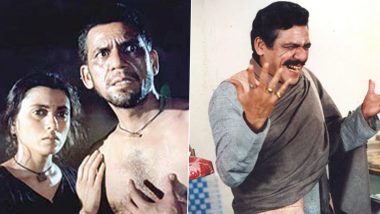 There was a time when Indian Television content was far more progressive, informative, entertaining and educational than movies. Television was a great place to be and Doordarshan fulfilled all our entertainment needs. During that time, we were blessed to watch shows that delved deeper into society and put forth stories that we weren't aware of. Thanks to that, we saw some brilliant performances by Om Puri in some of the most amazing Television shows of that time. Be it the horrors of partition in Tamas or a quirky narrator of Mr Yogi or a corrupt comedic politician in Kakaji Kahin, Puri was just excellent in everything. It was those times when delving into both shows and movies was not seen with hesitation or there would have been no Shah Rukh Khan either.  36 Years of Jaane Bhi Do Yaaro: 5 Dialogues From Naseeruddin Shah-Om Puri Film That Are Purely ICONIC!

Anyway, coming back to Om Puri, on his birthday today, we would like to tell you about some of his shows that deserve a huge round of applause.

Puri played a host of characters as it was based on Pt. Jawaharlal Nehru's book Discovery Of India. He was Aurangzeb, Asoka, Ravana, Duryodhan and others. Directed by Shyam Benegal, this show is a must for everyone who wants to learn something about India and not just make claims on Twitter.

The partition of 1947 is a wound that is still fresh even after more than 70 years of Independence. Britishers made sure we will never forgive and forget when they quit India. All that is amazingly depicted in this show by Govind Nihalani. Puri played the protagonist in this series based on Bisham Shahani's book by the same name. Puri as Nathu will make you weep and wail.

One of the hilarious series on the TV was Mr Yogi. While Mohan Gokhale or Mr Yogi goes on a hunt for a suitable bride for him in India, Puri as a narrator puns on the protagonist making it a laugh riot. Puri has a certain way of saying his lines and that makes it so amazing to hear.

Directed by Basu Chatterji and based on a book named Netaji Kahin, this was a political satire that aired on Doordarshan. He was a loud, corrupt politician with a wicked laugh. It was so easy to dislike him in the show and yet you will find yourself chuckling at his mannerisms.

Kirdaar so some of the acclaimed writers of the country penning amazing narratives for the TV audience. Many of them had Puri in them and all of them were fantastic.

(The above story first appeared on LatestLY on Oct 18, 2020 08:10 AM IST. For more news and updates on politics, world, sports, entertainment and lifestyle, log on to our website latestly.com).