18 Years of Arya: How Allu Arjun, Sukumar’s Duo Remains a Hit till Date

Arya, which is one of the major hits of Allu Arjun's career has completed 18 years since its release in 2004. The blockbuster romantic comedy that made Allu Arjun the star that he is today 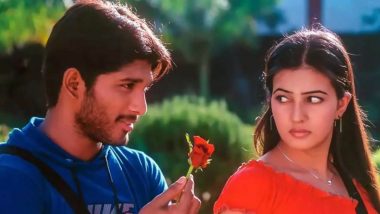 Arya, which is one of the major hits of Allu Arjun's career has completed 18 years since its release in 2004. The blockbuster romantic comedy that made Allu Arjun the star that he is today is still said to be one of the greatest miracles of his life. Not only Allu Arjun, but Sukumar too benefited from the major break that Arya gave to his career. Sukumar, who is also a director of Allu Arjun's other big hit film 'Pushpa: The Rise' shares a very close bond with the Indian superstar. Working together, the Allu Arjun- Sukumar team hit the bullseye at the box office. Pushpa 2: Shooting Of Allu Arjun’s Next To Commence From August, Film To Release In 2023 – Reports.

After working on 'Arya' in 2004, the hit jodi went on to make its sequel in 2009 starring Kajal Aggarwal and Shraddha Das along with Allu Arjun in the key roles. Adding more to their legacy, Sukumar and Allu went on to give 'Pushpa Part 1' in 2021 and are all set to take Pushpa 2 on floors in 2022. Allu Arjun and 50 of His Closest Friends Fly to Belgrade for South Superstar’s 40th Birthday Bash – Reports.

Pushpa which rocked the box office during the pandemic is considered to be India's biggest film in 2021. Meanwhile, fans are waiting eagerly for the sequel to Pushpa which is slated to go on floors in 2022.

(The above story first appeared on LatestLY on May 07, 2022 09:16 PM IST. For more news and updates on politics, world, sports, entertainment and lifestyle, log on to our website latestly.com).