The unit had erected a giant set resembling Chennai's popular landmark Mount Road in Hyderabad where certain important scenes of the film were shot in its previous schedules. 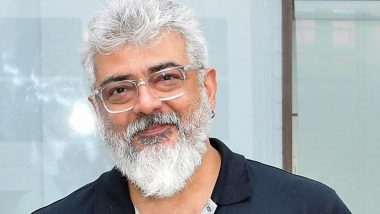 If rumours doing the rounds in the industry are to be believed, actor Ajith Kumar is to next shoot at the scenic Arakku Valley in Vizag for his upcoming heist thriller that is being directed by H Vinoth. The grapevine has it that Ajith will be shooting for the climax of the film in Arakku Valley for a week. Ajith Kumar Wins Four Gold and Two Bronze Medals at 47th Tamil Nadu State Shooting Championship 2022 (View Pic).

The film, which is being tentatively referred to as #AK61, has a plot that revolves around a bank heist. The unit had erected a giant set resembling Chennai's popular landmark Mount Road in Hyderabad where certain important scenes of the film were shot in its previous schedules. Ajith Kumar and Thalapathy Vijay To Work Together in a Movie Shortly? Here’s the Truth Revealed by the Sources.

Rumours suggest that Ajith, who recently chose to take a break from shooting by going on a riding expedition in Europe and then following it up with participation in a shooting competition, is refreshed and eager to shoot. The last schedule of the film is yet to get over. Once the film is done, Ajith is expected to move on to his next project, which is to be directed by Vignesh Shivan.

(The above story first appeared on LatestLY on Aug 16, 2022 05:39 PM IST. For more news and updates on politics, world, sports, entertainment and lifestyle, log on to our website latestly.com).