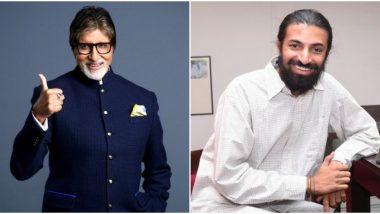 Prabhas 21, the tentative title of Nag Ashwin’s upcoming movie, will feature the biggest superstars of Indian Cinema. It was in July this year when the makers had confirmed that Deepika Padukone is on board for the Nag Ashwin directorial and would be sharing screen space with Prabhas. Now the makers have shared another good news. It has been confirmed that legendary actor Amitabh Bachchan is also on board for Prabhas 21. Amitabh Bachchan Joins Prabhas And Deepika Padukone’s Film Prabhas 21!

Vyjayanthi Movies, the production house that is bankrolling this magnum post, shared a heartwarming video along with the post that read, “Welcome aboard @SrBachchan sir, it is our honor to have you. Your birthday celebrations have begun! #NamaskaramBigB”. This is indeed the best news for Big B fans ahead of his birthday, which is on October 11. Many must have assumed that Big B would be making a special appearance or an extended cameo in Prabhas 21. However, director Nag Ashwin has cleared the air already by revealing about the legend’s role in this upcoming film. Prabhas 21: Fans Say Deepika Padukone and Prabhas’ Chemistry in Nag Ashwin’s Next Will Set the Screen on Fire.

#NamaskaramBigB Not a guest role or a special appearance...but a full length role so important, tht his characters name was the working title of an early draft...thank you @SrBachchan sir for the privilege...we will make it worthy of your time 🙏 #Prabhas #DeepikaPadukone https://t.co/tdX9ghABku

We just cannot wait to see the trio – Prabhas, Deepika Padukone, Amitabh Bachchan – sharing screen space in Nag Ashwin’s film. This pan-India film is touted to be futuristic sci-fi thriller. It is expected to go on floors by November and to be released next year.

(The above story first appeared on LatestLY on Oct 09, 2020 11:34 AM IST. For more news and updates on politics, world, sports, entertainment and lifestyle, log on to our website latestly.com).