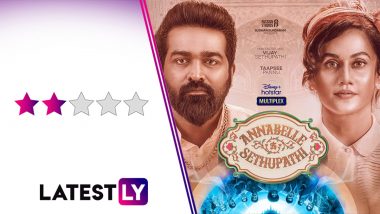 Deepak Sundarrajan, brings together two wonderful actors in Taapsee and Vijay Sethupathi for the very first time. Annabelle Sethupathi Review: Vijay Sethupathi and Taapsee Pannu’s Horror-Comedy Is ‘Lukewarm’ and ‘Nonsensical’ As Per Critics.

Both of them have done their fair share of horror-comedies in the past. Taapsee played the lead in Kanchana 2, while Sethupathi had got his breakout success in the much acclaimed Pizza. Sadly, Annabelle Sethupathi - despite that fascinating name - is a film that is a letdown considering the talents of the leads, and the rest of its funny cast.

That isn't the sad part, though. If the trailer wasn't a hint enough, Vijay Sethupathi, more or less, only has an extended cameo in the film, making his appearance in the second part. But the flashback portions involving his character - a royal named Veera Sethupathi - and his love story with a British lady Annabelle (Taapsee Pannu, with a distracting anglicised accent) is the best part of this film.

Less on humour, and more dependable on their chemistry, this flashback track offers nothing new and ends on a very predictable note, but both the actors add a delicate charm to the proceedings. There is a lovely nuance to how their romance begins, with Annabelle being more on a woman in control of her life and Sethupathi being someone who is floored by her confidence, despite being called out once for his misogynist assumption in thinking she doesn't know sword-fighting. From their whirlwind romance to their fairytale marriage to the tragic conclusion, this sequence has an heft that is more so felt because the rest of the film disappoints.

That's, however, only about 20 minutes of Annabelle Sethupathi. The rest of it is a horror-comedy, where the horror part is more on how unfunny the proceedings are. The focus is on a haunted mansion that is cursed where a group of ghosts reside, tied to the house and waiting for someone to break the curse. Save for the spirit of the cook (Yogi Babu), rest of them belong to the same family of a haughty former king (Jagapathi Babu, typecast as always) and are waiting for an outsider to break the curse and free them

The rescuer comes in the form of Rudra (Taapsee Pannu), who and her family are bunch of petty thieves. A stretched circumstance make them end up having to take care of the mansion, and the ghosts do their best to make Rudra remember her previous life and claim inheritance of what was once her property.

All these portions are played in a lighthearted manner, with the serious moments only restricted to the Sethupathi-Annabelle track. The tonal shift is awkward, of course, the trouble, however, is that the comedy doesn't work. It is pretty loud, veers towards racist and fat-shaming jokes, and engages in physical comedy that struggles to be funny. Despite the best efforts of the likes of Rajendra Prasad, Radhika Sarathkumar, Sunil, Devadarshini Chetan et al, seeing these actors repetitively scream at each other and prance around the place can only elicit a couple of guffaws at best. The only viewer who might enjoy the humour served in Annabelle Sethupathi is the one who still wait for Kanchana and Aranmanai franchise to spin more entries.

I might be an idiot to even look for logic in these scenes, but I can't help but wonder, how these ghosts, who are tied to a palace for decades, are so hip with pop culture references. Yogi Babu's character refers to Sunil's as a cleanshaven version of actor Vaibhav. There is another joke made on a recent film by these ghosts, that really doesn't make much sense. Also, when Rudra and her family arrives, why do the ghostly clan behave so confused about their staying arrangements in a palace they have been stuck in for years? When the humour doesn't work, you tend to poke around the (loop)holes! Annabelle Sethupathi: Vijay Sethupathi and Taapsee Pannu’s Pictures Go Viral Ahead of the Film’s First Look Reveal!

At least, it is good to see Taapsee take on such a light role, after some heavy duty stuff in Bollywood. Though the one actor who actually manages to leave an impact in these scenes is Yogi Babu, who has the best lines, and yet is effectively restrained.

All leads to a stretched climax that falls in the terrain of the climax of a bad Priyadarshan slapstick comedy, while also riffing off from Guardians of the Galaxy. I kid you, not! By the time, VS makes a (re)entry in the finale (if you think this was a SPOILER, you haven't seen enough Tamil movies), you won't really care for much.

(The above story first appeared on LatestLY on Sep 17, 2021 04:49 PM IST. For more news and updates on politics, world, sports, entertainment and lifestyle, log on to our website latestly.com).