Tollywood actor Rahul Ramakrishna who shot to fame with Arjun Reddy, has revealed that he is to tie the knot soon. 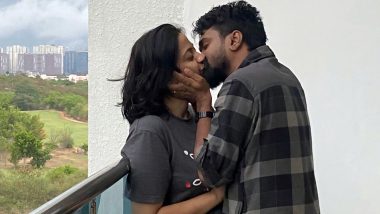 Tollywood actor Rahul Ramakrishna who shot to fame with Arjun Reddy, has revealed that he is to tie the knot soon. The actor also posted a photo of himself and his fiancee Bindu kissing. Several fans sent supportive comments on the post. Before the pandemic, Rahul, who made a name for himself in Tollywood with multiple blockbusters, had planned to marry his lady love, Bindu. Lock Upp: Sangram Singh Asks Payal Rohatgi to Marry Him During Family Special Episode (Watch Video).

Bindu is a software developer, and the couple had previously planned a simple registered wedding. Bindu was a big fan of Rahul's work, he previously revealed. At a gathering, the couple initially met. When Bindu offered him a ride back home because he couldn't locate one, the two connected. "I thought that was a pretty thoughtful gesture on the part of a stranger. As we opened up on the ride, our relationship began." Athiya Shetty to Marry Beau KL Rahul This Year in a South Indian Winter Wedding – Reports.

"We have a lot in common, whether it's personality or professional attributes," Rahul recalls. Apart from 'Arjun Reddy', Rahul has a couple of big movies included in his biography, while his recent appearance in SS Rajamouli's blockbuster pan-India movie 'RRR' grabbed him more appreciation.

(The above story first appeared on LatestLY on May 08, 2022 07:22 PM IST. For more news and updates on politics, world, sports, entertainment and lifestyle, log on to our website latestly.com).